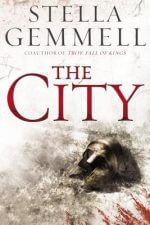 Steve knows that my favorite author is David Gemmell, whom I consider the epitome of true heroic fantasy. So when a copy of THE CITY by Stella Gemmell (Amazon) crossed his desk, he knowingly tossed it my way.

The story takes place in a massive city (called The City) that has been at war for generations. The City is huge. Built upon the ruins and former buildings of past lives, The City is ruled by an Immortal Emperor who is holds the city with an iron fist. The setting is completely solid, and I was immediately sold on the idea of a city-state the size of an small nation that was older than time. The dirty worn nature of The City and it’s citizens is evident from the start, and so well delivered.

I think the Emperor, as he was written, is hands down my favorite fantasy villain since… I can’t think of one I liked nearly as much. The people who work against the Emperor have determined that the only solution is to kill their ruler. However, since he is the IMMORTAL Emperor, you can imagine the sort of issues in that plotting. The reveals regarding the Emperor sell the conclusion of the story.

Stella Gemmell delivers heroes who are dirty, grimy and dark. THE CITY isn't necessarily heroic fantasy but I'd recommend it to those readers in a heartbeat

The choice for our POV characters was interesting at the first. The former general Bartellus and the sewer diving siblings Elija and Emly are our starting characters, and they really grabbed me and held me down in the story.  Eventually the focus shifts to a more military style of story telling and we lose out on those excellent starting characters. The replacement protagonists are well-written but lack the pathos of the starting three. I really missed them as it went on.

I kept having to put the book down and just sit in awe of such a story. Stella Gemmell delivers such a well-written tale, I can only compare it to the excellent debut novels of Brian McClellan, Scott Lynch and such company. She weaves a complicated plot together like she was a natural, (which she clearly is).

I would warn any reader who was a fan of David Gemmell that this is not a spiritual successor to his work, but instead it’s own story and type of book. David excelled at heroes who were larger than life and their enemies weren’t their morals or desires, but old age, death, and the foes of all mankind. Stella Gemmell, on the other hand, delivers heroes who are dirty, grimy and dark, and their foes were human and monster alike.  I wouldn’t call this heroic fantasy, but I would recommend it to any fan of heroic fantasy in a heartbeat.