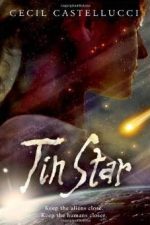 Stranded on an alien space station when she’s left behind by her colony ship, Tula is never able to contact them again. She must now learn to survive as a lone human among less than friendly aliens. Tula prepares for the day when she can have her revenge on Brother Blue, the man who left her behind, and who was responsible for the disappearance of the colony ship.

She begins to think she will never get off the station until one day, three years after being stranded, three humans arrive and are stranded themselves.

TIN STAR (Amazon), by Cecil Castellucci, is easy to read, the prose smooth and surprisingly gentle for the subject matter. We are introduced to the station, the aliens, and the politics in an almost off-hand way. Not like they’re unimportant, but that Tula’s real attention is somewhere else–so explaining the details of the world she lives in and those who populate it take second fiddle. As a result the world-building feels incomplete and at times it’s hard to truly visualize Tula’s surroundings as the story progresses.

Tula is clever, but also isolated. Stranded as a girl, she spends her teenage years having to depend on her own self for survival. She learns how to communicate with the aliens in ways that they understand–even becoming friends with a few of them–and how to use trade to get what she needs. Since the book is told from her PoV we’re limited to understanding the secondary characters, especially the aliens, and as a result their actions don’t make sense until explained after the fact. This makes character interactions sometimes feel contrived, and it’s those very interactions upon which a credible conclusion rely. (Hint: the ending, while exciting, wasn’t exactly credible.)

Tula begins to think she will never get off the station in TIN STAR until one day, three other humans arrive and are stranded themselves.

The prose and forward movement of the story hides deeper problems. I found the same issue in THE 5TH WAVE (EBR Review): the narration was so smooth and confident it was easy to accept the events and behaviors as real. Until you stopped to think about them, that is. The one thing THE 5TH WAVE did well that TIN STAR doesn’t is the emotion. Tula talks about events so blandly that it gives readers too much distance. For example we know she wants revenge on Brother Blue… but do we ever really feel her rage?

I didn’t hate this book. It was still an interesting read, and YA readers who are new to Sci Fi may find TIN STAR a good introduction to the genre without being overwhelmed. But just warn them that not all Sci Fi is this bland.