Review: Rain of the Ghosts 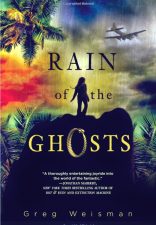 Teenage Rain Cacique lives in the Prospero Keys (known to locals as The Ghosts), a series of islands between Florida and the Bermuda Triangle. To her dismay, she’s pretty sure she’s going to spend the rest of her life there, catering to the tourists who come to enjoy the tropical weather and scenery. Her and her friend Charlie spend their last free days before school begins having as much fun as they can.

But while returning from a water skiing trip with friends, Rain learns of the death of a beloved grandfather, Sebastian, and she’s convinced her life will never be the same.

Early on Greg Weisman gives us a great sense of the setting in RAIN OF THE GHOSTS (Amazon), his clean prose leaving the storytelling unencumbered. It’s easy to imagine the scenery as Rain moves through her world. Her parents run a bed and breakfast on the island, but she’s resentful of the strangers who come and go in her life. The newest client is Callahan, a fellow from Australia whose odd behavior makes Rain suspicious. Right before Grandfather Sebastian’s death, he gave her a bracelet given to him by his grandmother: not only is it unique-looking, but it seems that it makes Rain able to see ghosts. Even though she has no proof, she thinks Callahan wants to steal it.

Weisman’s portrayal of young teenage angst (Rain is 13) and perspective was well done, without being overboard or annoying. Rain and Charlie’s feelings will seem real to tween readers; their interactions with each other and with the other teens on the island feel realistic. Unfortunately the brevity of the novel meant that much of what was introduced didn’t go anywhere, leaving the resolution too open-ended to feel complete.

While RAIN OF THE GHOSTS has many strengths, where it was weakest was in the narrative style: we don’t really learn “who” (other than his name) the narrator is until halfway through the book, but even after learning who it was I was confused, less about as to why than how it was done. As a result, the PoV character felt gimmicky, even if I get why Weisman did it–the limitations of a focused third-person narrative (say, Rain only) would have kept readers uninformed about what else was happening. It appears that there’s a bigger picture than what Rain understands about her grandfather and the bracelet he gave her.

RAIN OF THE GHOSTS is a quick, fun read with realism and fantastical elements woven together in satisfying ways. A solid book from a new fantasy author.

There are other people who are aware of her bracelet’s magical properties and will do what they can to get it. Fortunately, Rain has unknown allies with special abilities of their own: the local bum Maq whose ability to see the future makes him less aware of the present, which makes him seem a little crazy; and Opie (our narrator) whose awareness of present events isn’t limited to what he can physically see, which is why he knows everything Rain, Charlie, and others are feeling and what they’re doing at any given moment. Even knowing this, the narrative style was confusing–awkward switches between the heads of several characters was difficult to follow. I almost gave the book a “mediocre” rating because of the narrative style, but I think younger readers will be more flexible and will enjoy the novel despite this issue.

RAIN OF THE GHOSTS is a quick, fun read, with realism and fantastical elements woven together in satisfying ways.  Even if the wrap-up left a lot of open questions, the ending was still exciting.