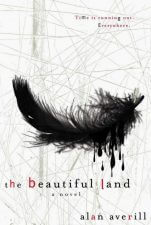 Tak does not lead a normal life. As a sort of Asian-American version of Man vs Wild he’s spent his life adventuring all over the world. At the opening of THE BEAUTIFUL LAND (Amazon) we discover that life isn’t going the way he planned. In the middle of a suicide attempt, Tak gets a fateful call that will give him a new purpose in life.

Samira suffers from PTSD due to her tours in Iraq. But she can remember a time when she was happy. Like before her mother died. Or her high school friendship with Tak. Then out of the blue she gets a frantic call from Tak who is convinced that if she doesn’t get on a plane and meet him within fifteen hours that she will die.

And thus begins the strange journey Tak and Samira must take in order to stop a mad scientist, a greedy corporation, and the Machine that will rewrite the current reality with one that will give the scientist/corporation the power they crave. The Machine isn’t a time machine, it’s a portal to the alternate realities, and there are thousands of them. One of them is called “the beautiful land,” a reality where the perfect land is the one you imagine, and the scientist who invented the Machine will do anything to live there, even if it means wiping out every living thing to do it.

THE BEAUTIFUL LAND, by Alan Averill, is weird and compelling at the same time. Averill tells the story with creativity and energy from Tak and Samira’s PoVs (sometimes jumping between their heads within paragraphs, but it works out ok despite the confusion) with a few side trips from secondary characters. However, Averill’s portrayal of these two messed-up people who regret the choices they’ve made is often over-the-top. When authors try this hard it makes a reader step back because it feels like manipulation. It’s not that I hated the characters, but I had a hard time liking them, even if their interaction with each other was believable.

THE BEAUTIFUL LAND, by Alan Averill, is weird and compelling at the same time. Averill tells the story with creativity and energy.

Even though the characterization was a little rough, at least Averill knows how to move a story along. The pace moved fast from the get-go, and carries you clear to the end. It’s set in the present-day, in a world where people like Tak and Samira get lost in the shuffle, but discover that even “normal” people can be the agents of change. The mad scientist angle is cliché, but that doesn’t make Averill’s take any less creepy and scary when Tak discovers the evil plan, and when we see the fallout from his decisions. I might have liked more trips to these alternate realities Tak got to visit–if only for the sake of seeing them–but in the end that’s not what the story was about so it would have been a distraction.

My favorite part was Averill’s engaging prose. He writes each scene with well-written imagery and a morbid sense of humor that sets the tone for the book. Tak’s hilarious observations about his situation and the realities he visits are fun (and sometimes disturbing) to read. Some of you will love Tak’s irreverent humor.

Steve has sent me enough dumb thrillers lately, i.e. VIRUS THIRTEEN (EBR Review) and PANDEMONIUM (EBR Review) that I was wary about THE BEAUTIFUL LAND–I’m not one for reading thrillers on my own time, anyway. Fortunately Averill provided more than just a thriller or horror story, but also a wild ride.