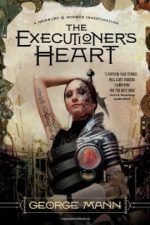 THE EXECUTIONER’S HEART (Amazon) is the fourth Newbury and Hobbes novel, and it takes place several months after the crazy events of the prior novel, THE IMMORALITY ENGINE (EBR Review). Veronica Hobbes’ sister has been rescued, and now Sir Maurice Newbury is desperately trying to figure out the key to her prophetic visions, and why the Queen of England is after her.

In a way, this novel is the start of a new series. It’s a new start that, while certainly building on the prior “trilogy”, sets off in a new direction. With the backdrop of Newbury trying to help Hobbes’ sister, a new threat runs amok. A series of brutal murders where the victims chests are torn open and the hearts taken. Along with it comes a vision that Hobbes may be the next victim.

This is pretty standard George Mann. The pacing is relentless, as usual, but is seems even more so with the “time bomb” that Newbury’s vision of Hobbes’ death sets into motion. The killer–The Executioner–is a terrific character herself. The weaving of her story into that of the other series regulars makes for fun fiction.

Really, that’s what I’ve come to enjoy the most about George Mann’s novels: the fun. I love how his glee for the characters and the world shine through in his writing. Every chapter has breathless momentum to it. There is no wasted space. Of course, when I say “fun” I don’t mean everything is rainbows and clockwork kittens. Mann doesn’t hesitate to put his characters into danger. These characters have been emotionally and physically worn down. Everything bad that can happen to them has happened, or happens in this novel. But the fun resides in the spirit both Newbury and Hobbes show. Beaten but never defeated.

THE EXECUTIONER'S HEART gives me steampunk, adventure, weird science, the supernatural, and the fun I need when I want to escape everyday life.

The majority of this novel revolves around The Executioner. In a way this is a transitional novel. I got the impression that it is a novel to get the pieces into place before the real fireworks start. And talk about a cliffhanger ended. Sheesh.

So here’s the deal. If you liked these novels before, you will love this novel. If you didn’t, this novel won’t change your mind. If you are a new reader yet to begin the series… well… I suppose I’ve spoiled a bit of it for you huh? Well you shouldn’t have read ahead!

I love this series. I have loved it ever since reading THE AFFINITY BRIDGE (EBR Review). THE EXECUTIONER’S HEART just adds to the fun. It gives me steampunk, adventure, weird science, the supernatural, and the fun I need when I want to escape the seriousness of everyday life.