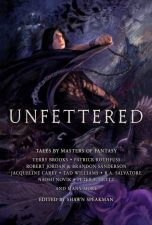 This anthology has attached to it one of those feel-good kind of stories that just makes you want to buy the thing. The editor, Shawn Speakman, contracted Hodgkin’s lymphoma in 2011, accrued a bundle of debt because he didn’t have health insurance at the time, and these stories were put together as a means by which to alleviate some of that debt. Each of the stories contained in the anthology were ones that the authors contributed freely to Mr. Speakman’s cause and showed them to rally round the flag, so to speak, of a fellow author that was in need. It was a reminder to me that even big-name authors are real people with real problems too. Sometimes it can be easy to forget that. So regardless of what I thought of this anthology (it was good, people – don’t let my little misdirections fool you) my hat goes off to each of the authors that contributed to the anthology. Bravo, my friends. Bravo.

UNFETTERED (Amazon), comes crashing down on us after a near four year absence. And ooh boy, does book 2 deliver on what it’s promising. If you haven’t read the first one, THE WAY OF KINGS >Amazon) is an anthology of 23 stories written by 22 different authors (Terry Brooks, had two) that had essentially no direction given to them at all. This was a “make an offering” kind of anthology. Some were new, some were old. Some were great. Some not so much. There was fantasy, and sci-fi, and a few that were more like “what?”. My breakdown of the stories into our typical rating categories landed thus:

So, for an anthology, that’s pretty dang good, people. There was a ton of great stuff here. A few of of the authors were new to me. Several of their stories made me want to find more of their core writing. That’s one of the really cool things about anthologies, in my opinion. Gives you a good idea of an author’s writing and story-telling ability without having to give over too much of financial or temporal commitment. I’ve outlined a few of my favorites (so hard to choose…)

Martyr of the Roses by Jacqueline Carey — Started slow but ended grrrrreat. This is a previously-unpublished story that sparked the religion in her Kushiel series. Two nobles, one from a foreign country, speak about the current state of affairs and some of the religion of the local country. A man accused of murder is chased by the local guardsmen past these two men. They observe the ensuing events and are forever changed by them.

Mudboy by Peter V. Brett — This story was going to be an introduction for a new character in his third book, but it was ultimately cut. Very young boy, living with his family in the demon-infested lands of Brett’s world makes a mistake that he’ll never forget. Really well-done. Made me want to read more of Brett’s stuff.

Heaven in a Wild Flower by Blake Charlton — Post-apocalyptic USA where some kind of atomic bomb has resulted in a large amount of people being reincarnated over and over again. There are still some natural-borns, but they are dying off. When a natural-born finds a floating, reincarnated baby, if they pick it up, there are some kind of nanobots that connect the two such that if the child dies, then the parent also dies. This was one of the stories that had the most direct connection to cancer. Really well done.

Select Mode by Mark Lawrence — Main character is a teenage version of the main character from his Thorns trilogy. Kid is being taken to be judged by an “arch” along with another man. He is expecting to be killed. Very well-written. Feels kind of old-school medievalish but there are obvious sci-fi elements that are part of the surroundings. This is exactly the kind of stuff I expected from Richard Morgan’s fantasy books, but didn’t get.

Shawn Speakman contracted Hodgkin's lymphoma in 2011, accrued a bundle of debt, and UNFETTERED was assembled to help him pay that off. A great ensemble.

There were lots of others that I really liked (Daniel Abraham’s, for example), and a few that I could have done without. Some of the longest were the worst, in my not-so-humble opinion, and I wasn’t surprised to find that my opinion of those stories coincided with our opinions of the author’s other work here at EBR. And because everyone is going to ask about it, the Wheel of Time story was okay. In all, I’m glad that it was cut out of the book. It totally didn’t fit with the rest of the story in AMoL. So, cheers all around for that.

This is a great anthology, for those that like what they have to offer. Yes, it’s pretty stacked with great authors, so my overall enjoyment of it wasn’t all that surprising. Actually, after I had read the introduction (written by Mr. Patrick Rothfuss) I was convinced that even if all the stories in the anthology absolutely sucked, the cost of the book was worth the introduction. He did a bang up job of it.

All around, a great offering from the publishing world, and well-worth my purchase.