Review: The Tale of Telsharu 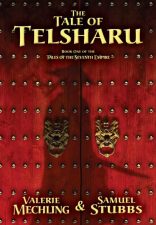 One hundred years ago Telsharu was imprisoned after a failed attempt to kill the emperor. Telsharu still lives, and in the opening pages of THE TALE OF TELSHARU (Amazon), he secures his escape from prison in order to finish the quest he began all those years ago.

Xansul, the youngest son of a noble house, secretly leads a group of rebels who struggle for freedom against a tyrannical emperor. He risks his own life and the future of his freedom fighters when one night he sneaks onto the palace grounds to test the security.

ShianMai, the emperor’s youngest daughter, wants only to gain her father’s favor, and works via politics to bring down the rebels by exposing their sympathizers and leadership. But her naiveté puts herself and those she loves in danger.

Daryun and Aisina operate their own martial arts training school in the mountains far north of the Imperial City, but even that remoteness doesn’t shield Daryun from his duty to aid the empire when the famed prisoner Telsharu escapes.

Sure TELSHARU borrows from well-known stories like The Scarlet Pimpernel, Crouching Tiger Hidden Dragon, and even Kung-Fu Panda–but then Valerie Mechling and Samuel Stubbs turn those stories on their heads, taking the familiar and breathing into it new life. It’s a good thing, too, because the opening prologue and chapters felt a little quaint and even silly, the prose too self-aware (even by the end when I was used to the prose’s rhythm, I still stumbled over some of the phrasing), the setting rather ordinary and full of unfamiliar words. But what will grab you here are the characters and the very difficult circumstances in which they find themselves.

THE TALE OF TELSHARU is a mash-up of several familiar stories that told an interesting tale and went in unexpected directions. Worth reading.

Told in a rotating third-person PoV between Daryun, Aisina, Xansul, ShianMai, and Telsharu, we come to appreciate their distinct personalities: Daryun’s humble strength, Aisinia’s determination, Xansul’s sense of justice, and ShianMai’s innocence. These are their strengths and their weaknesses. I enjoyed each couple’s relationships with each other, how they support each other, and become better people by knowing the other–it is these characters who will carry me to the sequel. Even the villainous Telsharu’s actions and motivations were choreographed with an empathetic hand.

The setting is a pretty standard Sho-gun Era meets Ancient China. However, the authors weave more details into the story about martial arts itself, the different disciplines, how warriors incorporate it into their own lives. This knowledge isn’t tacked on, it’s an integral part of the story. Even the way demons are introduced into the story feels seamless and natural. The fights had a sense of detail about how true fights worked, and as a result they felt real and visceral, even if flashy at times (not necessarily a bad thing).

The pace is consistent throughout the novel, the plot moving forward at a steady clip, with enough twists and tension to suck you into what at first seems a borrowed story, but eventually evolves into something more. It didn’t go where I expected it to, and by the exciting end I was drawn into the disastrous choices the main characters make–for good reasons or for bad–and the equally disastrous consequences. I’m interested in seeing how the Tales of the Seventh Empire series continues.