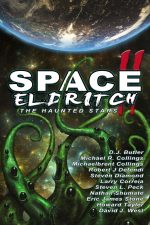 Disclaimer: horror isn’t a genre I enjoy. Really, in the slightest. I can count on one hand the number of horror movies I like. I’ve never read a horror anthology before, so needless to say, I wasn’t terribly excited about reading SPACE ELDRITCH II: THE HAUNTED STARS (Amazon). But I love Science Fiction so… what the heck.

I should lead with a note here, I did read SPACE ELDRITCH (Amazon), which is the first anthology, for continuity’s sake. This edition contains:

Those are some pretty good names (author-wise). So let’s go over the highlights.

We’ll start with “Fall of the Runewrought” by Howard Taylor. This is a continuation of Howard’s story from the first SPACE ELDRITCH anthology (which I liked). I think the highlight for me here was that Howard has developed a consistent and interesting world. The use of magic runes to create new tech was a great blend of magic and technology and it didn’t feel stale after the first story. The change from a single protagonist to a military-unit style storytelling was a different perspective on how his world has adjusted. I think this was the best story in the anthology. Hands down.

“The Implant” by Robert Defendi bothered me quite a bit. It wasn’t poorly written or crafted, but I felt like it better belonged as a Warhammer 40k fiction than something original here. It had a lot in common with those stories, so if you like that, then you’ll probably like this. Not a story in the plus column, but not necessarily because of Robert’s writing. To me, the subject material wasn’t what it needed to be.

“From Within the Walls” by our own Steven Diamond was my second favorite story outta the set. It was short, but interesting to read. It starts on a space station prison that operates with a lone “janitor” to take care of the maintenance. Things start to go bump in the night. There’s voices and such, and our protagonist discovers some very interesting things. It’s a little underdeveloped due to length. It could use some more… fleshing out (heh).

SPACE ELDRITCH II is a horror/sci-fi anthology with enough big names and highlights worth mentioning. Some really good stories in this one.

“The Queen in Shadow” by David J. West struggled to hold me. I almost put the book down during this time and walked away. The story treats the reader like they can’t understand logical progression and everything needs to be explained to them. And in the greatest faux pas of horror storytelling, the protagonist is a colossal idiot. Just…dumb. I was actually rooting for the demise of several of the characters here.

“Dead Waits Dreaming” by Larry Correia is next. Larry normally writes urban fantasy (not too far removed from horror as is), and this was a little out of his realm. However, I think Larry delivered a strong effort and the story shows the craftsmanship in his writing strongly. This one I enjoyed.

Find the other part of the anthology here:
SPACE ELDRITCH: Amazon