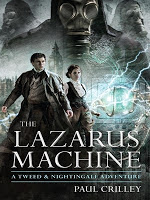 I recently re-watched Back to the Future. A good movie, if I do say so myself. (And I do.) Though when it came time for Doc Brown’s monologue about how he’d measured the distance from the “starting line” to the hanging wire he’d previously strung that Marty would need to start from at exactly the right time, so that at the precise moment that Marty’s car reached 88 miles per hour, the lightning bolt would hit the clock tower, travel down the electrical line the doc had hung, through the long hook extending from Marty’s car, and directly into the flux capacitor to send Marty back to the future… I had to take a moment to ask myself if I honestly cared that so much of the plot was based on ridiculously stupid timing and outright luck. And you know what I found?

THE LAZARUS MACHINE by Paul Crilley (Amazon) is the beginning of what appears to be a new series in the vein of Mark Hodder’s Burton and Swinburne books, with an alternate England, historical figures of prominence, and gloriously fast paced. The difference in LAZARUS, however, is that Crilley’s version of the England we know comes about because of the success of Charles Babbage (and his computing machine) and Nikolai Tesla (and his disbursement of electrical power), and the interesting science behind being able to capture the human soul and use it for various purposes.

Sebastian Tweed is the hero of the story. He’s a seventeen-year-old con man who works with his father to bring the bereaved citizens of London happy messages from their recently passed dead, and perhaps more than just a few coppers to their own pockets. Sebastian is not happy with the situation, but the point quickly becomes moot when a mysterious group of individuals, supposedly headed by none other than the nefarious Professor Moriarty, kidnaps his father. From this point, all due chaos ensues as Sebastian employs every trick in his shallow bag to not only find out where his father has been taken, but why he’s been taken at all. And, oh, you noticed the Moriarty bit? Yeah. Sherlock and Moriarty are also real characters in this story. So, it’s not just historical figures. There are also some purely fictional ones added to the mix.

The chapters are written in the thriller style. For the most part, they’re short, fast, and usually have a hook at the end to pull you into the next. Characterization is fairly light, with the greatest amount of time being given to the main character, Sebastian. World-building was really rough for me. Instead of being varied and nuanced like I enjoy seeing, nearly everything seemed to stem from Babbage machines and Tesla power. Even then, the “alternate” in this alternate history felt very light and almost more window dressing than anything of note or import. The main speculative element, the capturing of souls, had little to no explanation at all–it was just something that could be done.

While interesting and decently written, there really wasn't anything that grabbed my attention overly much in THE LAZARUS MACHINE.

While interesting and decently written, there really wasn’t anything that grabbed my attention overly much. I wasn’t very enamored with any of the characters. The typical shady-government scheming didn’t surprise me. In this case, the inclusion of Moriarty and Holmes actually worked against the story, because seeing them made my expectations of the book so much higher. Thus, when I approached the climax of the book and things started getting ridiculous (like, for example, punch-card driven computers that could be accessed remotely, retinal scans and voice prints as security measures, or jumping out of the top of a building that dwarfs Big Ben into a river…and not being instantly killed) I really noticed them. Unlike my nostalgic viewing of Back to the Future, I wasn’t so buried in the story that I could look past them.

That being said, if you find that you are easily sucked into fast-paced, thriller-type books, and can overlook some of Crilley’s more over-the-top inclusions, it would be fairly easy to enjoy this read. I mean, loads of people like Dan Brown’s books, and they seem to have many of the same characteristics as this one. If it were me though, on your side of this book-review equation, I’d appreciate the suggestion of a pass for this story. There’s lots better out there. Mark Hodder’s books for example. If, by some horrible twist of fate, I’ve failed to mention him to you before… you should try them. Ah, the goodness that is out there to be had. Unfortunately though, this one didn’t fit the bill.