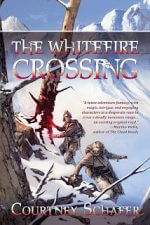 So a funny thing happened a while back. Courtney Schafer sent me over a copy of her debut novel, THE WHITEFIRE CROSSING (Amazon) with the hopes that I would read it, like it, and review it. All sorts of people were saying how terrific the novel was, so I was pretty excited. Well, some stuff came up in my day job that keeps me absurdly busy, so my actual reading time has suffered as a result. Thank goodness for Audible.com, right?

Here’s the general synopsis. Dev is a smuggler who just lost everything. His love. His business. His money. Everything. He needs a job bad, and he needs it to pay well. So he agrees to smuggle Kiran from their home country of Ninavel into the neighboring country of Alathia. What Dev doesn’t know is that Kiran is apprentice to one of the most dangerous mages in Ninavel.

Back to my story. I don’t read reviews on Audible (well, I didn’t before…). So I downloaded the novel and started listening. Within a very short time I found myself wondering why people liked the book. I was hating it. I wanted the book to die. I was formulating the review in my mind, and here’s a bit how it went (don’t worry, I didn’t ask myself the questions out-loud. Mostly):

Question: Man, this book is killing me. Is it the setting?
Answer: No…no the setting is actually pretty cool.
Question: Well, then it must be the characters, right?
Answer: Huh. No, not really. The main character, Dev has a pretty cool past. Kiran’s backstory is pretty great too. The side characters are kinda flat, but they don’t matter much.
Question: Uh, PoV issues?
Answer: Not at all. Dev is told in 1st Person, while Kiran’s sections are told in 3rd Person Limited. The distinction between the methods of delivery is actually awesome and clear, and there are no head-jumping mistakes.
Question: Well, then is must come down to the writing in general, right?
Answer: There were certainly some things that bugged me about it, but on the whole I was fine with Schafer’s skill with the written word.
Question: So what the heck is WRONG with you? (loaded question)

The answer to that last question came when I accidentally started a different audio book. My first thought was, “Dang, this reader sounds awesome… ohhhhhhhhhhhhhhhhhhhhh no wonder I hate THE WHITEFIRE CROSSING! The reader is the worst reader EVAR!!!” No really. Worst. Narrator. Ever. He made me want to stab myself in the ear with pencil. A dull pencil. Twice. Dipped in acid. I’ve heard kids who were in 2nd Grade read more smoothly. The narrator is Andy Caploe. Avoid anything read by him like the plague. So, I immediately did three things upon this heinous discovery:

1) Deleted the audio book from my iPod for fear that the bad narration would corrupt the other audiobooks on that device.
2) Pulled my actual copy of the book off the shelf and read it.
3) Resolved to read reviews about the quality of audiobook narrators.

Things were suddenly much, MUCH better. The novel reads quite well with a smooth flow. The plot, which follows Dev and Kiran through a treacherous mountain pass, was pretty great for the most part. The characters suddenly lost all their whining attitudes that the narrator gave them. I rather enjoyed all the detail put into the mountain-climbing sections of the novel. The back-stories of the characters had far more emotional impact, and their decisions seemed somehow better. On top of that, my ears stopped bleeding, which was definitely a good sign.

THE WHITEFIRE CROSSING is entertaining read with a refreshing setting. A few annoying ascpect of the storytelling kept us from giving this a big thumbs up.

Here’s the thing. Schafer actually does a pretty good job with THE WHITEFIRE CROSSING. I love the way the story was told to the reader. The feeling of the setting is pretty awesome. I understand why so many people were giving Schafer such good reviews.

That said, I did have some issues–real ones this time. The biggest one was the overuse of similes. In the immortal words of Nick Hexum from 311, “I use a simile lightly ‘cuz that sh@t’s played”. Wise words to any author. Use one or two in a novel. Not one every other page. It was majorly distracting and didn’t actually accomplish what was probably intended. The second thing that bothered me was the convenience of how certain things are resolved in the end fight. It was predictable and shoehorned in. Lastly, the stuff that followed the final battle of the novel felt overly long. I understand the importance, but it had a bit of that feeling I had when I watched The Return of the King in the theater. Dragged out. Overall, not deal-breaking, but worth pointing out.

THE WHITEFIRE CROSSING–that actual, print version–is an entertaining read. Schafer is definitely a talented author. There is far more good in this book than there is bothersome. The setting is refreshing, which is something that we can all use more of in our fantasy reading. The best compliment I can give at this point is to say that I am really looking forward to reading the sequel, THE TAINTED CITY (Amazon).