Review: The Girl Who Fell Beneath Fairyland and Led the Revels There 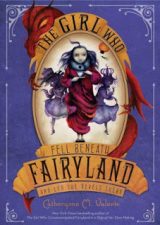 Do you know where these are from? “Follow the yellow brick road”, “There’s no place like home” or even “I don’t think we’re in Kansas anymore Toto.” How about we try another one? If I were to talk to you about going down the rabbit hole would you know what I meant? What if I asked you about the Mad Hatter? You would wouldn’t you?

Why am I bringing these up at the beginning of this review? It’s simple. The story of the Wizard of Oz and Alice in Wonderland have permeated our culture. There have been dozens of retellings of them in movies and cartoons and comic books. I can’t count how many different versions I’ve seen of Dorothy, the Scarecrow, the Tin Man and the Cowardly Lion marching merrily off to Oz. Heck there’s another movie about Oz coming out in just a few months. The reason I bring this up is that I think what Catherynne Valente is doing with her Fairyland books–of which THE GIRL WHO FELL BENEATH FAIRYLAND AND LED THE REVELS THERE (Amazon) is the second–are something special, something amazing, something that hopefully someday will permeate our culture to the extent that Oz and Wonderland have. We should be able to talk to anyone about a Wyverary named A through L. There should be version after version of September (our protagonist) available to look at and see as she goes through her merry (and sometimes not) adventures. These books are the modern fairytales that we should all share and have in common.

I have made no secret in the past of my love of Valente’s work. I’ve been reviewing it here on Elitist for a few years and even before that I would tell everyone I knew about her brilliant work The Orphan’s Tales (still my favorite of hers). And while I still prefer the Orphan’s Tales to her Fairyland books, I do think these are her most accessible books out there and they are so filled with magic and joy that to not read them is to deprive yourself of something wonderful. Why would you do that to yourself? I digress, let me tell you about the books.

This is the blurb from amazon:

September has longed to return to Fairyland after her first adventure there. And when she finally does, she learns that its inhabitants have been losing their shadows—and their magic—to the world of Fairyland Below. This underworld has a new ruler: Halloween, the Hollow Queen, who is September’s shadow. And Halloween does not want to give Fairyland’s shadows back.

But that doesn’t really do it justice. There are numerous characters that come in and out of the story. There are smaller sub plots that September has to deal with. I feel really awkward really, because I can’t do it justice here.

September as a character is fun to watch and read about. When she goes to fairyland she revels in the fact that she is in a fantastical world. Fairyland is amazing and she loves it and longs to return again and again. There are problems for sure, but it never gets in the way of the magic. The voice of the books is also a delight. The narrator frequently pulls back the curtain to talk to you, the reader, to either warn you of something ahead or lament a decision September has made. It feels like you are reading the book with a friend or rather that a friend is telling you this story. The magic in these books is second to none. It is bright and fantastical and weird and wonderful.

September loves to visit fairyland. Let her show you there in THE GIRL WHO FELL BENEATH FAIRYLAND AND LED THE REVELS THERE.

I could go on and on, but I’ll let you discover them for yourself. Or better yet, go find someone to read these with and share it.

If you haven’t already, go pick up the first book, THE GIRL WHO CIRCUMNAVIGATED FAIRYLAND IN A SHIP OF HER OWN MAKING (EBR Review). These books are simply a delight to read, and are some of the best modern fairytales you can find.

Series links:  The Girl Who