Review: A Guile of Dragons 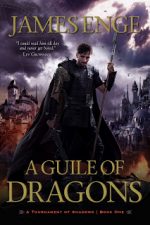 I’ve been meaning to try out James Enge’s work for some time now. I’ve seen some high praise (there is a blurb by Lev ‘effin Grossman on the cover for instance) and so my expectations were high when I cracked open A GUILE OF DRAGONS (Amazon). This novel is a prequel to Enge’s Ambrose series and I saw that as a perfect opportunity for a beginner to jump in. As a book filling in some background detail for a beloved series fans may be satisfied. For those yet to be initiated this may not be the best entry point.

Here is the book description courtesy of Amazon…

“Before history began, the dwarves of Thrymhaiam fought against the dragons as the Longest War raged in the deep roads beneath the Northhold. Now the dragons have returned, allied with the dead kings of Cor and backed by the masked gods of Fate and Chaos. The dwarves are cut off from the Graith of Guardians in the south. Their defenders are taken prisoner or corrupted by dragonspells. The weight of guarding the Northhold now rests on the crooked shoulders of a traitor’s son, Morlock syr Theorn (also called Ambrosius). But his wounded mind has learned a dark secret in the hidden ways under the mountains. Regin and Fafnir were brothers, and the Longest War can never be over.”

Sounds pretty epic, right? Right? Yeah, I thought so too at first. A GUILE OF DRAGONS starts out pretty well. The birth of Morlock is a cheerless one. The baby Amrbose is left to his own when the parents, both traitors of a sort, are exiled from the realm. The baby soon comes into the care of Tyr, lord of the dwarves and friend of Morlock’s father. Morlock grows up under the mountains amongst the dwarves, eventually leaving to become a Guardian. This is where the main story picks up.

The intro is good. I like the way Enge binds our world to his fictional setting with the Sea of Worlds. And the fictional setting of the Wardlands appears very cool at first. The idea of a fantasy land without a monarchy of sorts is refreshing. The Graith of Guardians is an interesting concept, policing the realm and enforcing the law in a mostly benevolent manner. I liked the culture and lore of Enge’s dwarves, as he gives reasonable explanation to a lot of genre tropes. I even liked Morlock at first. Orphaned by traitors and raised by dwarves I grew an intimate connection to Morlock.

But all of this cool stuff fizzles out after the opening chapters. The interesting and unique setting becomes a drab and dull affair. World building details are sparse and the majority of the plot takes place in and around the mountain city of the dwarves. The characters become just as bland as the setting. As fascinating as Morlock starts off he completely fails to develop. I was surprised at just how little attention was given to building this beloved character.

I was also under the impression that Morlock is a maker of sorts, a skill learned under the tutelage of the dwarves. As I understand it, this is a major aspect of the series. Morlock does not make anything over the course of A GUILE OF DRAGONS. This doesn’t matter to me so much but it may disappoint fans. The action is also minimal and lackluster. Again, I don’t know if this is a deal killer for fans but it could be.

Overall A GUILE OF DRAGONS was pretty blah. I just wasn't feeling it and struggled to finish. Great ideas, decent writing, but kind of half-baked.

Overall this book was pretty blah. I just wasn’t feeling it and I struggled to finish. It could be that my high expectations set the bar unfairly high. I don’t feel like that is the case but it is something to consider. Fans of the series may know better what to expect. It could be that I’m not the proper audience and all of these things are strengths of Enge’s writing. The thing is that there are good ideas here, great ideas really. And there is some solid writing. It’s just that the whole thing felt half baked. If you are a fan then you are probably going to buy this to complete the collection. Otherwise I recommend giving this a pass–or at least see if the sequel resolves these problems.

It may be best to just start with BLOOD OF AMBROSE (Amazon) after all.

Series links:  A Tournament of Shadows