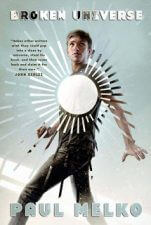 THE BROKEN UNIVERSE (Amazon) is actually a sequel to his novel THE WALLS OF THE UNIVERSE (Amazon) which in turn was a novel length version of his Hugo nominated short fiction story (also called the “The Walls of the Universe”). Instead of just telling you what the THE BROKEN UNIVERSE is about, I’m also going to tell you the set up for THE WALLS OF THE UNIVERSE and why this is such a fun place to be in. In a way, this review will serve as a review for both novels.

THE WALLS OF THE UNIVERSE is a story about Johnny Rayburn. One day Johnny–who works on his parents’ farm and is saving up for college–runs into himself. This is another John from another universe who has a device that can skip between universes. Trusting himself, Johnny uses the device to check out another universe. What can the harm be, he can always skip back right? Wrong. The device can only move the wearer forward to the next universe and not back to the previous one. The novel follows the two Johns. One who is trying to understand the device so he can get home and get revenge on being swindled of his life. And the other is an imposter John who starts to try and build a life in the (to him) new universe.

It’s a great book. The characters are fun and easy to relate to. The prose is neat and concise. It’s the type of book that you read and suddenly realize you’ve been reading it for a couple hours.

I won’t give away the ending to the THE WALLS OF THE UNIVERSE or much about THE BROKEN UNIVERSE. Let’s just say that the story escalates beyond what is happening to two Johnnys in this multiverse. There are powers at work and several factions that also know about skipping from one place to the next.

Both books are just plain fun. There’s a nice balance of big ideas and grand schemes mixed in with smaller human moments and actions. The solutions that are come up with in some cases aren’t brilliant mind bogglingly complex schemes, but rather simple elegant solutions that feel real.

THE BROKEN UNIVERSE is a great starter SF book. If you know someone who wants to give the genre a shot this is a good a way to introduce it to them.

Surprisingly the stuff I enjoyed most about the books were the small things, the relatable bits. I’m usually a sucker for a good space opera and weird stuff, but here I found myself wanting to read about these characters and how these ordinary people would deal with extraordinary circumstances.