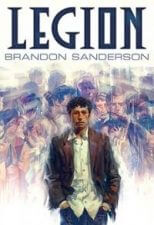 I love reading short fiction by my favorite novelists. There is a nice sense of focus in these works, and they serve as a refreshing change of pace and scope while usually maintaining the integrity of that author’s writing ability. See, I really like Brandon Sanderson‘s work. But sometimes I just don’t want to read a 1000 page Stormlight Archive novel.

LEGION (Amazon) is a novella by Brandon Sanderson, published by the fantastic Subterranean Press. This novella follows Stephen Leeds–or Mr Legion as he is sometimes called–a man with a unique condition. Leeds has multiple personalities, but this just isn’t a normal case of a man who hallucinates. His hallucinations live with him in his massive mansion. Each of these aspects help Leeds by offering their own specialized skill sets, and Leeds uses these skills as a consultant of sorts.

You see, Leeds is a genius, and those aspects help him channel it.

Well, this assumes you believe Leeds at all. He says he isn’t crazy. But really, should we trust him?

This is part of the fun of a story like this one. A majority of the story left me wondering if this wasn’t all some elaborate fantasy. Right off the bat, we are introduced to various aspects of Leeds’ personality. The gun-crazy Navy SEAL, J.C.; Ivy, the shrink; Tobias the… well, guy who seems full of every history and political science fact ever; and even a guy who thinks he is a dethroned King. All in all, this is a terrific intro into a story. The hook is set right from the very beginning. Every time a new character was introduced, I wondered if this was the moment we find out this is all in his Leeds’ head.

The story follows Leeds as he is asked to consult on a case about a missing man with a missing camera. But not just any ordinary camera. This one can take pictures of the past. George Washington shaving. Famous landmarks before film existed. The potential for a device like this is staggering. I’m not going to get much more into it, since that would ruin the fun of the story for you.

A hero you is so crazy you're not really sure you can trust him? Bring it on! Brandon Sanderson shows us a new kind of hero in LEGION.

Brandon’s wit is a bit more under control here, in my opinion. This prevents the pacing from halting and keeps the reader immersed in the story. We get some very Science Fiction concepts, and some huge hints that this novella was just a test piece for something much, much bigger. I desperately want to read more of this character. This felt like a delicious appetizer that hints at an amazing main course.

In LEGION, we get the epic feeling that Brandon Sanderson is known for, but in a condensed and focused format.

If you are a fan of Sanderson’s work, purchasing this is a no-brainer. It’s worth every penny.

Note to Brandon: If there is one thing that bothers me about this, it is the gun terminology. Please talk to our mutual buddy, Mr. Correia to get this all fixed. It would have made the story even better. Neither the main PoV or his hallucinations would have made the mistakes that they were making in the story. Especially since Leeds is a freaking genius.