Review: Down the Mysterly River 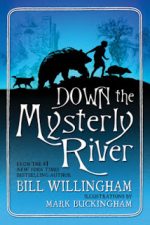 I have a kid that has a blanket.  Anyone with kids (or who can still remember their “blanket”) totally knows where I’m going with this.  This raggedy piece of purple stitching gets dragged around everywhere.  Actually, it only used to be a blanket–these days about 12 square inches in size–but it’s still the only source of comfort that works every time.

DOWN THE MYSTERLY RIVER (Amazon) is a novel written by Bill Willingham that contains an amalgam of other authors’ characters caught up in a young-adult adventure story right out of the storybooks.  The main character, Max the Wolf (originally written by Lawrence Swift) is a scout’s scout that teams up with a number of talking animals (from the minds and imaginations of several others) after waking up in a forest with little to no memory of how they got there.

First comes the honorable badger Banderbrock.  Next, McTavish, is a ratty tabby cat with a superiority complex.  Last is Walden the black bear, previous sheriff of his demesne.  All of them are at risk because of the Blue Cutters, a local group of medieval-ish castle-living bad guys that want to “cut” everyone up with their special blue knives.  Being “cut” makes a person/animal completely ignorant of their past life, and essentially turns them into a complacent resident of the new world.  The only way to get away from the Blue Cutters, is to find the Wizard.  And so… We’re off to see the Wizard! The wonderful Wizard of–

Oh, come on.  You knew that one was coming.

The core of this story is a typical adventure yarn. Unfortunately, there’s not much more to it.  The introduction of the characters, and running away from the Blue Cutters, make up the bulk of the plot movement.  The pacing felt really slow and I got tired pretty fast of the wandering, and eating of wild raspberries,  and continued wandering.  Characterization was mostly informational.  We know that Max is a “Scout”, McTavish is a “Monster”, and Walden is a “Sheriff”.  Actual character was found in considerably less abundance, although the resolution of Walden’s story arc was at least satisfying, if not surprising in any way, because he was constantly talking about what he wanted.  A detriment to the real characterization present was the scattered POV time amongst Max, the animals, and even a couple of the Blue Cutters.  This scatter among the characters made the book feel loose and unformed, and led to some annoying (and sometimes mildly confusing) transitions.

DOWN THE MYSTERLY RIVER is a novel that contains an amalgam of other authors' characters caught up in a YA adventure story right out of the storybooks.

Those that have journeyed with the borrowed characters in this book may find this story something like an old blanket.  Just like finding a favorite, old book, finding a new one with familiar characters can sometimes be just as comfortable.  Prior to reading this one, I hadn’t come across any of these characters though.  So, for me, this story was more like the old, raggedy strip of used-to-be-blanket that my kid drags around with her, instead of the warm, fluffy one that I remember toting around myself when I was a kid.

As an homage to the work of others, I take my hat off to the author.

As a stand-alone?  I’m afraid I just have to pass.