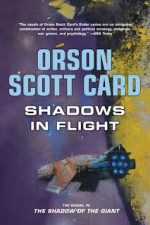 In a perfect world reviewers would read books with no biases at all and based the work completely on its own merits and not compare it to other books, or other works of the same author.  No prejudices would sway the reviewer for good ill.  Wake up.  We don’t live in that world and perfect as we Elitists are, we still have our biases.  That being said I’m going to give you a review of SHADOWS IN FLIGHT (Amazon) the latest work in the Enderverse by Orson Scott Card.  Firstly let me lay my biases out for you so you can know understand where this review is coming from.

1. Ender is cooler than Bean.  Always has been, always will be.  Any reference in any Ender book that says otherwise is blasphemy (even if Card writes it).

2. I have read all of the Ender books — ENDER’S GAME (Amazon), SPEAKER FOR THE DEAD (Amazon), XENOCIDE (Amazon), CHILDREN OF THE MIND (Amazon), and even ENDER IN EXILE (Amazon), but I haven’t read the Shadow books (those focusing on Bean).  I wasn’t interested in stuff happening on earth.  I wanted space, aliens and ships.

3. I didn’t like ENDER IN EXILE.  It felt like a shout out book where all these random character and circumstances kept popping up to remind the reader of all that cool stuff that happened in the Shadow books.

There are plenty more biases but you get the idea. We can start the review now, right?  Good, on we go.

Shadow’s in Flight follows Bean, who is now a giant whose body won’t stop growing and is in fear of dying soon, out in space on a ship traveling at near light speed with his children.  The plan is that while Bean and his children are traveling for a scant few years, a cure for the condition that Bean has and has passed down to his children, will be found on earth thus saving them all.  Complications ensue (of course) and plots are revealed.

I was worried that this book would be similar to ENDER IN EXILE, where we spent most of the time recalling stuff that already happened in other books.  I am happy to say that this wasn’t the case.  This story is much more self-contained.  The background information I was given was just enough to get me in on the plot.

As usual with Card’s writing, the pace was easy and quick.  I think I read the whole book in about 3 days (which is slow for a Card novel, but I was busy too).  I always wish for a bit more description of things, I mean it’s space ships and aliens after all, give me some details, but the reading is always enjoyable and the dialogue is fun and snappy.

SHADOWS IN FLIGHT is a fun book, especially for those who like Card's Enderverse. Kind of a short novel, but all-in-all a fun read.

The characters are always smart (very smart normally) and often reflect on how much smarter they are than anyone else.  I’m OK with that most of the time, but here I found it a bit much.  Three of the four main characters are 6 years old, and yet they bicker and fight like adults in Joss Whedon’s worlds.  They occasionally throw tantrums and it just felt like a slap in the face at times.  “I’m super smart, but I’m also 6, get it?”  Then of course there are the action sequences that again, because of the age, pushed my limit of credibility.  I have a few kids and even if they were super smart (they’re plenty smart, they’re my kids after all, just not SUPER GENIUSES), I still don’t think they would be coordinated enough to pull of stuff like here.

These are minor complaints.  All in all, SHADOWS IN FLIGHT was fun.  Right on the edge of “Mediocre” and “Like”.  I was worried about it, and yet it turned out to be quite enjoyable.  I wouldn’t pay the full price for a book that felt more like a novella (it’s quite short, a little over 200 pages, with really large type), but if you happen across it, you won’t hate yourself for picking it up. It will likely depend on how big a fan you are of Card’s Enderverse.