Review: Hellhound On My Trail 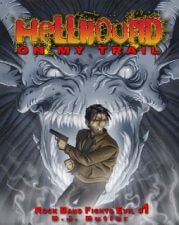 Let me be clear about something right away. HELLHOUND ON MY TRAIL by D.J. Butler (Amazon), is not the next Great American Novel. It is the first in a series of novella-length works (Rock Band Fights Evil) that appeal to those of us who need a bit more Pulp Fiction in our reading.

HELLHOUND follows Mike Archuleta as he takes one last gig as a stand-in bassist for a band out in the middle of nowhere. Why is this his last gig? Because he plans suck-starting his gun after the set. Mike is a complete alcoholic, a pretty good bassist… and he is haunted by the ghost of his dead brother, Chuy. Naturally, whenever someone uses the phrase “one last [insert job here]” you know right away that things will go wrong.

I don’t usually review self-published stuff. Why, you ask? Because it usually sucks. Bad. However, I owed the author a favor. I promised him nothing, but I told him I would at least give HELLHOUND a read. If it was good, I would review it. If it was bad… well… things would go poorly.

I am relieved. HELLHOUND is good, pulpy fun. I read HELLHOUND in one sitting, and very nearly decided to read part 2, SNAKE HANDLIN’ MAN (Amazon), in that same sitting.

Do you know why I liked this small story so much? (Or why I seem to be asking so many questions in this review?) I liked this story because 1) for the most part it doesn’t feel self-published, and 2) it doesn’t pretend to be anything more than a pulp fiction romp. In fact, HELLHOUND relishes the chance to take nothing seriously. As a reader, this is one of the best ways to experience a real sense of escapism.

This first novella is ridiculously fast paced. Butler hops from one action sequence to the next effortlessly and breathlessly. We are introduced to the other members of the band that Mike Archulta temps with, and then BAM! Monsters, angels, Heaven and Hell. Really, there is a huge amount of potential here. The tone is carried almost effortlessly, and it is immediately apparent that Butler is writing this with absolute glee. Though wildly different in content, the tone of the novel (silliness, pacing, etc) really reminds me of Ben Aaronovitch’s MIDNIGHT RIOT (Amazon) (or RIVERS OF LONDON for you UK readers).

HELLHOUND ON MY TRAIL by is not the next Great American Novel. It will appeal to those of us who need a bit more Pulp Fiction in our reading.

It isn’t perfect. There is a definite style that Butler is going for here, and by the end of the story small pieces of it had worn thin for me. Essentially it amounts to Butler trying to convey a very comic book feel without the use of illustrations. The descriptions of sounds, in my opinion, is a bit over-done. I can see this bothering some people way more than me, or not at all. Personal preference. My other pet-peeve has to do with the Spanish. I lived in Mexico. I’ve heard all sorts of swearing. About half the time it was spot on–usually when it was the dead brother, Chuy, talking–but the other half it felt like I was just reading American sayings directly translated into Spanish. Lastly, the version I read had some editorial stuff that could have been fixed…but hey, it’s digital. Butler can go back and fix that whenever.

Here is what I will say about D.J. Butler and the beginning of this serial. Butler is on the verge of making it. Honestly, he probably already should have made it. He’s already better than a lot of the published stuff I see out there–again, this is a rarity since most self-published stuff just plain sucks. If the follow-up stories are as entertaining as HELLHOUND, then I would absolutely love to see a place like Ace/Roc pick this up and chuck it into an omnibus. I’d totally buy it.

The best part is that HELLHOUND is insanely cheap. It’s a buck on Amazon. That’s a steal by any definition. Just over 100 pages of pulpy fun for only $1. Seriously, go buy it. Now. Then buy the rest.