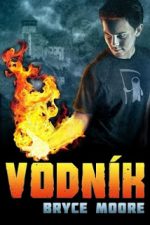 I am not the ideal target audience for a YA novel. But lately… man, it seems like there have been some amazing YA novels coming out. I suppose this is the benefit of being a reviewer–reviewers have to read everything. Because of this, my already broad reading tastes seem to be in a continual state of expansion. They evolve. But whatever, right? You just want to know what I thought about the YA novel VODNIK by Bryce Moore (Amazon).

Before we begin, I can already see some of you readers wondering where you have heard that author’s name before. He’s an occasional reviewer here at EBR. Before you all grab your torches and pitch-forks, remember that I am ALWAYS honest when it comes to reviewing a novel. If I like it, I like it. If I hate it, I hate it. Bryce approached me a while ago asking me to review his novel, VODNIK. I believe my exact words were, “OK… but you realize I have to be honest right?” He realized the position I was in, and still agreed. I guess he felt pretty confident.

VODNIK is about a boy named Tomas. After a fire burns down his family’s home (along with all their possessions), they decide to move back to the country they are originally from, Slovakia. Tomas is typically emo for the first few chapters, but mercifully moves past that stage quickly. I’d like to thank Bryce personally for not subjecting the reader to page-after-page of angst. Bryce: We are still friends, and you can continue to do reviews here. Look what writing good books gets you!

Anywho, much of Tomas’ character growth–of which there is a substantial amount–involves crazy stuff which begins to happen. He starts seeing things that no one else can. He starts seeing visions of the past. All of this is tied to his family’s mysterious past, and the strange happenings that made them move from Slovakia to the USA when Tomas was only five years-old.

VODNIK is a YA novel that revolves around Slovakian folklore, and this angle is what makes Moore’s novel such a compelling read. It’s so fresh and different. These mythological creatures Moore has brought to life on the pages are so different from what I normally read in folklore-centric novels. It’s hard for me to do anything but applaud. Seriously. The act discovery that Tomas goes though–both external and internal–makes VODNIK have a more broad appeal that most basic YA novels.

Now, there are a few things I should comment on before I give you readers my final recommendation. VODNIK is not perfect. Many of the things I’m about to bring up will likely not bother a soul. But they bothered me, and this is my review. Tomas is a movie/TV junkie, and so many of his references are based on US pop-culture and cinema. It allows the author to sum up a huge amount of description in a single quote, and makes a reader familiar with the references laugh quite a bit. However, many of the references will be lost on much of today’s youth. Much of the humor is based in these references, which I thought were hilarious. Will a teenager–the target audience of this novel? Hard to say.

I personally found the pacing to be off a bit. It’s a bit like running on tread-mill and having it stop suddenly. Your momentum carries you into a none-too-gentle encounter with the control panel… and then the machine turns back on at full speed. It can be a bit jarring. I think this has to do with the novel progressing from one set-piece to the next and summing up the in-between with “Some time passed.” I like a little down-time where we get to see some more simple character moments that don’t involve all the weird stuff going on. I need better transitions. But that could just be me.

My last nitpick is about predictability. Again, this could just be due to my having read far more novels than is healthy. I knew what was going to happen. I’m no Paul Atreides (I had to interject my own “pop culture” reference!), but it was no mean feat to see where the story was going. It didn’t ruin the novel by any means, but I was a tad bummed when everything I had predicted happened.

VODNIK is a YA novel that revolves around Slovakian folklore, and this angle is what makes Moore's novel such a compelling read.

Yeah, I had some issues with a few things in the novel, but overall I really liked VODNIK. There is a ton of promise here, and Bryce Moore is excellent at characterization. The human characters are fantastic and realistic, but it’s the supernatural characters that make this novel breathe. The vodník is such an erratic (intentionally) and fun character. The Death, Morena, is appropriately alien in her thought processes. It is obvious to me that Bryce writes these supernatural Slovakian beings with glee.

The other thing Bryce does with effortlessness is portray the racism of the area. Most of it devolves into bullying, but where it doesn’t the situations are morally disturbing. Handled so well, yet I can see it being even better if the stakes are raised in the sequel.

VODNIK is a terrific YA novel. There’s no doubt about it. It’s uniqueness and characters overcome the shortcomings. You should buy it and read it. It’s well worth your investment. Prospective authors should read it as an example of how to write a non-conformist Urban Fantasy. The best thing I can say about VODNIK is that it makes me want to read the sequel RIGHT NOW!

I think most people will feel as I do about VODNIK. That means you should have a copy in your collection.