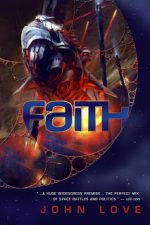 Sometimes the only way to stop an unstoppable alien spaceship is with a group of outcast sociopaths. Or at least that’s what the novel FAITH by John Love (Amazon) would have us believe.

Faith is the name given to a mysterious and seemingly invincible ship that is coming to attack humanity. The ship has been seen before and every time it has struck, Faith has left that civilization on a downward spiral towards decay. The only chance of stopping it is an Outsider ship–a slender ship packed to the gills with weapons and crewed by people with special abilities. The term “Outsider” is derived from the the crew including some sociopaths. The Outsider ship must then do battle with the alien vessel of unknown abilities and weapons.

The plot synopsis I had read of the book immediately intrigued me, not to mention it was billed as Space Opera and Military SF. Then I heard comparisons to Peter Watts work and I thought his book BLINDSIGHT (Amazon), which is a very similar story if you sum it up…and I thought that story was BRILLIANT. I ordered it as fast as I could and got right to reading.

I’ll sum it up for you. The book was good. I enjoyed reading it. I kept coming back to it. It was fun. Lots of fun, even. The problem was, I couldn’t buy-in to it.

Maybe it was the comparison to Watt’s work that killed it for me. In BLINDSIGHT we see some very disturbed and disturbing characters that are truly creepy and foreign. They are as alien as the ship they come into contact with, and I loved that. Here in FAITH I’m supposed to believe that these are people who could not be tolerated in normal society. They have unique gifts, major issues, psychosis and flaws. But in the end, they worked together as a crew relatively well. It wasn’t the model of efficiency, but I expected the crew to appear scarier, more damaged. I wanted to see a group of very deranged individuals tackle the unknown. The characters had flaws, but they felt tacked on to me and not the driving force of their personality.

Sometimes the only way to stop an unstoppable alien spaceship is with a group of outcast sociopaths. Or that's what FAITH would have us believe.

I don’t mean to sound harsh about the book. I liked it. I really did. But I was hoping to get lost in the book. I wanted to be carried away and not come up for breath until the end. Instead it seemed more to me like a friend who is exaggerating a story. “I once caught a fish that was ten feet long and weighed four hundred pounds!” He tells a fun story, but you don’t believe him. That’s what this felt like.