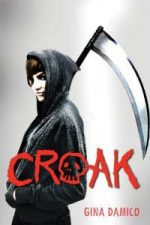 Lex Bartleby has an attitude problem. Once a straight A student, she now likes to fill her school days by punching, kicking, or biting anyone who might have the nerve to annoy her. Her grades are in the toilet, and she just has trouble giving a damn. In an effort to break through to her, her parents send her off to live in with her Uncle Mort for the summer in a tiny village called Croak.

Once there, she discovers anything but a pastoral farm scene. Her uncle is a Grim Reaper, and Croak is a town devoted to killing people. Not in a cold-blooded sort of way. More of a necessary-duty-for-death-to-function angle.

What follows is a twisty-turny plot that is somewhat sporadic and flighty, but keeps the pace going with a good sense of humor. Gina Damico’s CROAK (Amazon) drew me in from the first chapter. Lex is different from your standard YA fantasy protagonist these days: she curses, she likes to get drunk, and she’s got a mean streak a mile wide. I liked the huge contrast to other books I’d read, and the premise was more than intriguing. For the first few chapters, at least, the book kept it up.

Unfortunately, it couldn’t quite keep the pace for the entire novel. Lex loses some of her spunk once she arrives in Croak, and the world Damico has created starts feeling uneven and inconsistent. There are just too many soft spots in the world building for me to completely fall in love with the book. One non-spoilery example would be that Croak has about 80 residents, and they work in teams to take care of all the deaths in New England and its surrounding states. Now that I’ve done all the math (looking at population numbers, mortality rates, and the like), it seems a bit more plausible, but it would have been really nice for Damico to have Lex wonder how in the world so few people take care of so many deaths. This might seem nit-picky by me, but it’s only one example of many. While on one hand, the book has a hard edge to it, the center of it has a tendency to trend to early Harry Potter gooeyness. That contrast isn’t the world’s best combination. The depiction of the afterlife is another hard pill to swallow, if you’re looking for more specific examples.

If you like young adult fantasy but have been wanting to see it trend a bit darker, then check this book out. It’s morbidly good fun.

In the end, the voice and premise of the novel were enough to keep me intrigued. I really genuinely liked the characters, and I very much wanted to see what happened next. It’s clearly the first in a series, and I’ll be checking out the next one when it comes.

If you like YA fantasy but have been wanting to see it trend a bit darker, then check this book out. It’s morbidly good fun.