Review: The Language of Dying 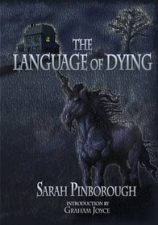 Horror writers often get a bad stigma attached to them. It seems like no matter who you are (with a few notable exceptions), once you are a “Horror author” you are looked at as not being a good writer. I’ll admit that I was one of those super judgmental folks before I began this blog. I’ve since learned that genre has nothing to do with writing quality.

Remember Sarah Pinborough? She wrote A MATTER OF BLOOD (EBR Review) and SHADOW OF THE SOUL (EBR Review), and I loved those books to death. Sarah is currently one of my absolute favorite authors, largely due to her ability to not only write awesome horror stories, but mainly due to the high quality of her writing. I was at World Fantasy and happened across a copy of Sarah Pinborough’s . It’s a limited edition novella, but don’t let that turn you away. Sarah told me at the convention that this was the best thing she’d written. So is it?

Horror is typically (and erroneously) associated with blood, guts and shock value. But Horror is much more than that. It can be complex, and focused on the things that terrify individuals and/or families. THE LANGUAGE OF DYING is about the horror of dealing with some of the most horrible situations a family can go through – the impending death of a father.

THE LANGUAGE OF DYING is no hack-and-slash, opting for the more pesonal side of the horror genre, but IMHO makes it more powerful.

Death – especially of a personal nature – is often glossed over. People don’t like to talk about it, and when they do, it is limited to fairly general terms. The complete personal thoughts of a person rarely are spoken. Why? Because sometimes those thoughts aren’t good. THE LANGUAGE OF DYING follows the main PoV – the middle, female child out of a family of five – as she deals with the imminent death of her father. It’s a terrible situation, and then she deals with the rest of her broken and dysfunctional family. Every member of the family feels extremely real. They each act in utterly believable ways, and not all of their actions are noble. Actions of extreme selfishness in the novel are countered by moments of sincere love from unlikely places.

Don’t go into this novel expecting Horror in the hack-and-slash vein. This is a more personal Horror. It resonates on a deeper level, thus making the suspense and terror of the situation much more powerful. Honestly, I’m completely blown away by THE LANGUAGE OF DYING. Is it for everyone? No. Some people just won’t get it. That’s a shame, because this is one of the best works of short fiction I’ve ever read.