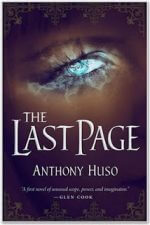 A good friend of mine lent me his copy of THE LAST PAGE by Anthony Huso (Amazon) saying that it was a book he thought I would really enjoy. He compared the book to China Miéville (of whom I am a rabid fan). I’d heard some other good things about it as well so I picked it up and read it. Here’s the blurb, (mostly because I’m not sure I could describe the book succinctly by myself).

The city of Isca is set like a dark jewel in the crown of the Duchy of Stonehold. In this sprawling landscape, the monsters one sees are nothing compared to what’s living in the city’s sewers.

Twenty-three-year-old Caliph Howl is Stonehold’s reluctant High King. Thrust onto the throne, Caliph has inherited Stonehold’s dirtiest court secrets. He also faces a brewing civil war that he is unprepared to fight. After months alone amid a swirl of gossip and political machinations, the sudden reappearance of his old lover, Sena, is a welcome bit of relief. But Sena has her own legacy to claim: she has been trained from birth by the Shradnae witchocracy–adept in espionage and the art of magical equations writ in blood–and she has been sent to spy on the High King.

Yet there are magics that demand a higher price than blood. Sena secretly plots to unlock the Cisrym Ta, an arcane text whose pages contain the power to destroy worlds. The key to opening the book lies in Caliph’s veins, forcing Sena to decide if her obsession for power is greater than her love for Caliph.

Meanwhile, a fleet of airships creeps ever closer to Isca. As the final battle in a devastating civil war looms and the last page of the Cisrym Ta waits to be read, Caliph and Sena must face the deadly consequences of their decisions. And the blood of these conflicts will stain this and other worlds forever.

With comparisons to China Miéville it can’t really be surprising that I was slightly underwhelmed with the finished product. There is much in THE LAST PAGE to be admired and there are certainly wonderful ideas, but as a whole it just didn’t satisfy me the way I was hoping it would.

And I feel bad about that. This review is going to come off seeming like it was a “meh” book. It will certainly be filed in the “Books That Are Mediocre” category. But that doesn’t really do it justice. To me that feels like I’m saying that the book was OK. Not true, there were parts of the book that were good. There were parts that were very good, excellent even. And then there were parts that I didn’t like so much, and others I thought could be better.

Let’s start with the good shall we? (I’m an optimist that way.) The ideas. Just like in a standard China Miéville book, THE LAST PAGE has quite a few really weird slightly gross and totally enthralling ideas swimming in it. There are moments that just stick out; pictures, scenes, and scenarios that are just so darn cool you want to paint them and hang them on your wall (except that some of them are really gross and you don’t want that on your wall). The other thing I really rather enjoyed was the writing itself. There were moments when the language was just gorgeous. It was thick and vivid and really helped paint that mental picture. One scene in particular when the (not gonna spoil it) finally (not gonna tell you). Man, that was sweet!

THE LAST PAGE is a mixed bag of clever ideas, memorable images, but also more than a few storytelling issues. Open to reading more of his stuff.

But then there were times when the language was actually an obstacle. My dad told me he had seen someone refer to the writing as “Someone threw a thesaurus at a wall” and honestly at times THE LAST PAGE felt that way. It felt as if he were trying TOO hard to wow me with how cool the language could be and it got confusing. Sometimes the language worked, others it didn’t.

The other problem I had with the book was the story itself. It seemed less to me a coherent story that moved along with good twists and turns, than a random series of events to take us from one cool idea to another. For me it lacked direction and focus. The character arcs for Caliph and Sena just didn’t do it for me. They didn’t grow enough as characters or come to great conclusions or do much of anything other than take us from cool idea to cool idea.

All in all though, I’m glad I read THE LAST PAGE. Like I said there are some images and ideas that I will take with me and for that I am grateful. It was even enough for me to give Huso’s next novel a shot when it comes out. Overall the ideas are great. If he can clean up the story and characters a bit for me, that will be something to read!