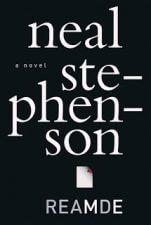 REAMDE (Amazon) is the second Neal Stephenson novel I have read, the first being the all time geek classic SNOWCRASH (Amazon). Unlike SNOWCRASH and, from what I understand, the majority of Stephenson’s other works, REAMDE is a pretty contemporary affair. Fans of irreverent, pop-culture laden science fiction will be disappointed in no small degree. Those looking for a fast paced thriller, on the other hand, may want to give REAMDE a chance.

The story starts out with Richard Forthrast, family black sheep and video game entrepreneur. Richard has made quite a name for himself in the business world by building an MMO (Massively Multiplayer Online) game from the ground up with a focus on harnessing the revenue stream of Chinese “gold farming.” The game’s success attracts a group of hackers that unleash a scheme to ransom players own encrypted data files back to them for a fee. I could go deeper into the plot, but not without giving away major spoilers.

REAMDE starts out strong as Stephenson introduces readers to Richard and his family as well as the vastly imaginative concept behind Richard’s MMO titled, T’Rain. Stephenson is well known for utilizing infodumps as a method of world building and this is clearly evident at the beginning of the novel. Richard’s personal history and the nature of T’Rain is established early on. Not once did I find an infodump to be boring or jarring. Stephenson is a highly intelligent author that has obviously done extensive research on the topics he writes. T’Rain in particular is a brilliant creation, not from just a gaming standpoint but from a money making standpoint as well.

The problem with REAMDE is that Richard and T’Rain feature prominently at the start but vanish towards the middle. Richard reappears at the last third of the book and T’Rain gets a little more spotlight but the book is not really about either of them. It is difficult to go into too much detail without broadcasting any spoilers but a couple hundred pages in the plot gets hijacked by a seemingly random occurrence that ends up taking priority through the rest of the novel. Granted, this is obviously was Stephenson was planning but it feels like the story got derailed and continued chugging along off the tracks instead of making any attempt to link back up. REAMDE is much more about international terrorism than it is about online gaming and computer hacking.

Fans of Stephenson will probably be expecting something deeper than REAMDE. There is no real theme to the novel, no probing into culture or psychology.

Once you get past this abrupt change of pace of course REAMDE makes for a solid thriller. The cast is diverse, ranging from Zula the adopted niece of Richard to Hungarian hacker Csongor, ex-Spetznaz security consultant Sokolov, and British spy Olivia. There is plenty of globe trotting and a fair bit of action especially in the last hundred or so pages. Stephenson takes special care to properly write about the handling of firearms and writes believable action sequences. The villains are pretty flat, standard ne’er-do-wells with no deeper motivation than to kill.

The thing is, fans of Stephenson will probably be expecting something a little deeper than REAMDE. There is no real theme to the novel, no probing into culture or psychology. And if Stephenson fans will be off put by the lack of depth, thriller fans will likely be unwilling to sit through hundreds of pages of build up. There are a lot of moving parts to REAMDE and it takes every bit of the considerable length to (somewhat coincidentally) guide all the chess pieces into play for the final showdown.

If you are going to read REAMDE don’t rush out to be the massive hardbound, weapon of blunt destruction edition. Pick up a copy at the library or wait for it to be converted into a smaller (but still considerably deadly) paperback.