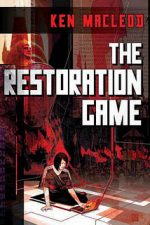 Sadly I think I can write up this review for Ken MacLeod‘s THE RESTORATION GAME (Amazon) in one, short sentence. Ready for it?

Too little, too late.

I’m gonna write my review. I’m gonna tell you a bit about the story and various other things, but everything you need to know is right there. This book was hard to get through (and it was only like 250 pages), and while there was some very cool stuff that happened (really really awesome stuff that I think deserves more attention than it got here), it happened too late in the story and honestly most of the story didn’t seem to lead up to the conclusions.

I’m getting ahead of myself. Let’s start with a recap of the story shall we?

There is no such place as Krassnia. Lucy Stone should know—she was born there. In that tiny, troubled region of the former Soviet Union, revolution is brewing. Its organizers need a safe place to meet, and where better than the virtual spaces of an online game? Lucy, who works for a start-up game company in Edinburgh, has a project that almost seems made for the job: a game inspired by The Krassniad, an epic folk tale concocted by Lucy’s mother, Amanda, who studied there in the 1980s. Lucy knows Amanda is a spook. She knows her great-grandmother Eugenie also visited the country in the 1930s and met the man who originally collected Krassnian folklore, and who perished in Stalin’s terror. As Lucy digs up details about her birthplace to slot into the game, she finds the open secrets of her family’s past, the darker secrets of Krassnia’s past—and hints about the crucial role she is destined to play in THE RESTORATION GAME…

I took that right off the back of the book and really it fits well. If that sounds like your type of book, then by all means dive right in and enjoy.

The problem I have with it is that there’s really no mention of anything remotely Science Fictionish about it. Sounds like a political thriller doesn’t it? I have news for you, that’s what this is. About 225 of the 250ish pages are devoted to a political thriller type of story. There are plots and schemes and revolutions and more factions and groups of people than I could keep track of (literally—I was very lost in who was working for whom and double agenting for what). The other 25 pages deal very briefly on some very interesting science fiction ideas, almost all of which occur at the end after I’ve already slogged through the rest of the book.

If you’ve liked Charles Stross’s near future thrillers (HALTING STATE and RULE 34) then I think THE RESTORATION GAME is up your alley.

As political thrillers go does the book work? I honestly don’t know. I don’t read a lot of them. I prefer SF (that’s kind of why I review them). There were moments that I enjoyed and even parts of it that I was engaged in, but more often than not I was trying to bull through it hoping that it would turn around.

As far as the SF stuff at the end, well, I liked it a lot. There were some very cool ideas. Ideas that made me think, ideas that I would like to see explored some more. But in the end those ideas seemed rather tacked on to the political story. I think I would have preferred a much shorter story (novelette perhaps) with the same SF, but a more streamlined version of the rest of the story.

Maybe this is your cup of tea. I’ve seen some good praise for the book out there. Honestly this could be a case of just being the wrong book for the wrong reader. If you’ve liked Charles Stross’s near future thrillers (HALTING STATE and RULE 34) then I think this is more up your alley.