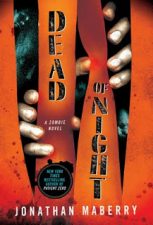 As much as I liked zombies, I think there was a point where I reached my limit. I used to get all sorts of excited when I read the back of a novel and the golden word “zombie” jumped out at me. But then things got a little out of control. Zombies were everywhere; TV, movies, books… wherever you looked a zombie was staring back at you. So I cut back. I stuck to AMC’s The Walking Dead and the excellent comic it is based one. I limited my zombie novels to those by two authors: Mira Grant and Jonathan Maberry. A month or two ago I started feeling an itch. A desire to read about zombies. Right when I was about to give in, I got Maberry’s new, straight-up zombie novel in the mail, DEAD OF NIGHT. Not only did I get to indulge my slight itch for zombies, but I did it by reading one of my favorite authors.

DEAD OF NIGHT (Amazon) is about the onset of the zombie apocalypse in Stebbin County, Pennsylvania. A famous serial killer is executed, then sent to Stebbins County for burial. Except this is a zombie novel, so you know this guy isn’t going to stay buried… if he even makes it into the ground in the first place. The main characters are two cops, Dez Fox and JT, and a reporter, Billy Trout (who is Dez’s ex). These three characters make great reads, and for the most part act like i would expect them to (more on this in a bit).

Here’s the thing. This is a zombie novel in the most traditional manner. Zombie outbreak –> zombies bite people –> everyone freaks out –> guns, guns, and more guns –> zombies bite people…you get the idea. While not the most original take on the subject, it is Maberry’s execution of it that really gives the novel some bite (Pun totally intended! Stop shaking your head, you know it was awesome!). His pacing is fantastic. His humor well placed. His horror even more perfectly placed than the humor. For me, the novel got completely awesome when PoVs from the zombies started showing up. So well done. So. Well. Done.

I have two things that kept pulling me out of the novel. First, I felt like there were too many PoVs. We had the main characters, zombies, side characters, nobodies, government people, a radio station…basically everyone in Stebbins County and in Washington DC. It was a few too many in a book that wasn’t long enough to incorporate that as many as were included. But I could deal, because the pacing kept the pages turning.

the thing that really pulled me out of the novel was how unaware of zombies the people were. They act like they never had heard of zombies, or that Romero was never born. Even when the dead start walking around chomping on people, the scared individuals start throwing around (and dismissing) everything from viruses to terrorism to freaking vampires…yet they never think, “Hmm, zombies.” Maybe it is because I am spoiled by how well the self-aware world worked in Mira Grant’s FEED (EBR Review). Regardless, this really pulled me out of the story. On the flip side, after I finished the book I heard that this was Maberry’s way of trying to capture a Night of the Living Dead type of atmosphere in a modern setting. Assume people didn’t have much knowledge of zombies. How would the government, law enforcement agencies, news people and general citizens act? It softened the blow quite a bit, and gives the book a lot more leeway. If you go into the novel with that latter mind-set, you may not have any problems at all (and I recommend you do read the book thinking that way regardless–you’ll like the novel more).

DEAD OF NIGHT reaffirms why Jonathan Maberry is one of my favorite authors. Everything is just so utterly fantastic in this book, as with his others.

I was leaning towards only “liking” the novel rather than “loving” it when I read the last two chapters. Those two chapters changed my mind. I ended up loving this book. Would I want a sequel? Nah. I want this story left like it is. It has more impact with it ending this way. I would like to see Maberry hit the more supernatural stuff again like in GHOST ROAD BLUES. Until then, and until I get a new Joe Ledger novel, DEAD OF NIGHT will tied me over perfectly.

This just reaffirms why Jonathan Maberry is one of my favorite authors.

PS – I should also point out that Maberry’s use of the TS Elliot poem “The Hollow Men” is freaking awesome. Well done!