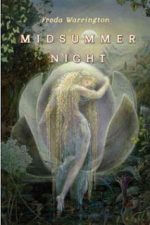 Gill, former Olympic track hopeful, ends her running career after a life-changing car accident as well as a relationship with her trainer-boyfriend. Julianna, world-famous sculptor, is on the verge of bankruptcy as the result of not having sold a single work for the last fifteen years. It’s at Julianna’s remote British estate where their stories merge. Gill rents the little cottage on the grounds with the intent to recover in some peace and quiet. At the same time Julianna is hosting a summer art school, and plans to muddle through somehow and keep the creditors at bay.

It’s during a stroll through Cairndonan Estate’s extensive grounds that Gill inadvertently walks into the Otherworld—and a man follows her out.

From there on out it’s a tumbling waterfall of story and information. Because, really, there’s a lot of back story that has to be revealed. Fortunately Freda Warrington’s deft hand weaves all the information without clunky exposition or contrivance (OK, maybe there is some contrivance, but the prose is so charming that you’ll just go with it) into a complicated story that blends the magic of the Otherworld with Earth.

Gill and Julianna, our PoV narrators, are two very different women. Gill is still a young woman, but is broken body and spirit, and despite her assertion that she’s recovering from her injuries, it’s more like she’s hiding. Julianna is in her 60s, although she looks much younger. She’s driven by the need to make Midsummer Night, the sculptural group she’s been working on, perfect before presenting it to the public. The supporting cast of ex-husband, housekeeper, art school teacher Peta, and others, are well drawn and interesting in their own right. There’s Leith, the man who follows Gill from the Otherworld who is human, but has been gone so long from Earth he can’t remember his former life. Then there’s the sinister Rufus, the Aetherial man who first took Leith and will do anything to get him back.

There is present-day Earth as you know it, but there’s also the Otherworld, a sort of fairyland where magic originates. There’s crossover between the realms, with ley lines on Earth where Aetherials—the inhabitants of the Otherworld—travel from realm to realm. Some Aetherials have chosen to live among the humans, and as a result they’ve changed from those who still live in the Otherworld; Peta is one such Aetherial, which would explain her knack for art. In MIDSUMMER NIGHT (Amazon) the boundaries between the two realms blur, and we slowly come to understand that the Aetherials don’t necessarily have the humans’ best interests at heart.

MIDSUMMER NIGHT could have been another typical book about the Fae, but she keeps a tone throughout that makes it feel real.

The story ebbs and flows, so occasionally you come to a point in the novel where you feel like the climax should be any minute and story will wrap up… only a new event or information is tacked on. By three-quarters of the way through you’ll start to feel that the story is being dragged on unnecessarily, and wonder if Warrington will just get on with it. But when the climax does come, then you realize that it couldn’t have been any other way. It doesn’t end like you’ll expect it to, all tidy and happy. But that’s what makes this story worth reading, because it would have been just another mediocre book if it had—Warrington stays true to the tone of the novel that she started with.

If you enjoyed Harkness’ A DISCOVERY OF WITCHES (EBR Review), and are impatiently waiting for the sequel, this may be the book to tide you over.

MIDSUMMER NIGHT is the loosely tied sequel to Freda Warrington‘s ELFLAND (Amazon), but is readable as a standalone.