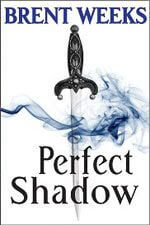 Brent Weeks‘ immensely popular Night Angel Trilogy (Amazon) was published in quick succession. Readers had all three of his debut books on hand, devoured them, and then had to wait for his next novel. While imperfect, it was easy to see Weeks’ potential for spinning a good yarn. THE BLACK PRISM (EBR Review) has been released since then, but Weeks did take a little time to go back to the world he started out with, and gives us a novella about the assassin Durzo Blint.

Durzo is a character with a lot of back story, but since Night Angel wasn’t about him, we didn’t get to see much of it. “The Perfect Shadow” will give readers a glimpse into his life, specifically about how he became the man that is Durzo Blint. If you haven’t read any of the Night Angel books you wouldn’t know that Durzo is actually almost 700 years old, and has lived a lot of lives, in different countries, under different names.

As far as character studies go, it’s too short and even disappointingly cliche. It’s written much like Weeks’ first book WAY OF SHADOWS, with its movie-esque action scenes and standard fantasy setting; the pace is quick and the prose easy to read. Unfortunately very little time is spent on Durzo actually learning the assassin trade and the rest of the time we’re exposed to frequent wish-fulfillment sex. There’s little to no setting, so those unfamiliar with the world will have a hard time creating a mental image of the time and place, especially since Weeks jumps around Durzo’s memories.

PERFECT SHADOW is a novella that gives us a little background on the popular Night Angel character Durzo Blint--assassin extraordinaire.

It’s only available on Amazon Kindle and Audible for pretty cheap, so if you loved the Night Angel world, and Durzo fascinated you, then you may want to pick this up. It’s a quick read with details and insight about what makes Durzo an interesting character. But if you haven’t read the trilogy, you’d best pass.