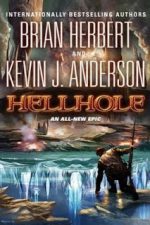 Everyone has prejudices. I don’t care who you are or what your background is, we all have things that just irk us to no end. As a reviewer it can be difficult sometimes to put those prejudices aside, to try and read a work based on it’s merit alone and ignore everything else. I have a secret for you readers. I’m not a fan of the latest Dune books put out by Brian Herbert and Kevin Anderson. I haven’t read them, but I have read the original Dune and it’s one of my favorite books ever. I don’t like the new books because it feels like they are trampling on something sacred to me. Who are they to tell me what else happened in the Dune universe. Only one person has that right. Frank Herbert. And since he is dead we are just going to have to content ourselves on what he left for us. Now I know, Brian Herbert is Frank’s son and maybe they even have some old notes and things. I don’t care. It still feels wrong and I don’t like it (plus the other reviewers here at EBR all assure me that the new Dune novels are freaking terrible).

So when I received HELLHOLE by Brian Herbert and Kevin Anderson (Amazon), I thought it was a cruel joke being played upon me (and who knows, it may have been), but I decided to put aside my prejudices and read the book and judge it on it’s own merits. And then something funny happened, something strange and utterly unexpected.

I know, weird right? But I did. I was having fun reading it. And despite the cast of characters that appeared to include hundreds of viewpoints, I was able to easily keep track of the story and enjoy it. The story takes place on a backwater planet named Halholme (nicknamed Hellhole by it’s citizens) where a defeated General Tiber Adolphus is exiled. He there attempts to undermine the core planets, start a rebellion and organize a new government of deep zone planets. Really it’s more than that, but the rest of the characters and story all hang off of that basic framework. I was surprised how all of those stories interwove and brought out new and interesting details.

And then aliens showed up.

Now, I’m an SF nerd, no apologies. If there’s an SF book to be read and reviewed here at EBR, I’m usually the guy to do it. I love aliens, I really do. I love weird planets and alien cultures and all of that, but these aliens killed this story for me. They put a gun to the novel’s head and blew it to messy chunks of confetti. The aliens felt forced, unimaginative and all-powerful/wise in that Yoda way, yet cryptic in that zen master way. It all felt so over-done that I wanted to throw up. Which is a bummer, cause I was enjoying it up to that point.

HELLHOLE was a surprising roller-coaster of a read. I just wish that it had ended on an upswing instead of a down. You know?

So all in all, the book was a surprising roller-coaster of a read. I just wish that it had ended on an upswing instead of a down. There’s good stuff to be had here, but I don’t think I’ll be rushing to pick up the next book in the series. In the end, the total package was mediocre.

P.S. Can you believe I made it through this whole review without making a reference to reading a book entitled HELLHOLE and being forced to review it. SO MANY JOKES!