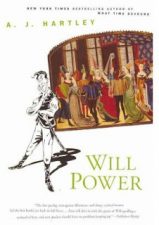 The first thing you should know about William Hawthorne (aka Will) is that he’s an actor. He’s unabashedly self-serving, considers himself more clever and charming than he is, and profoundly enjoys his creature comforts.

Unfortunately, those character traits get him into trouble more often than not.

In ACT OF WILL, PoV narrator Will joined a small mercenary group after being branded a rebel, and they had some wild adventures (even if it did focus more on the traveling than the adventure part…). In WILL POWER (Amazon), their story continues; however you won’t have any trouble jumping right into the action without having read ACT OF WILL.

Right off the bat our friends find themselves on the run from the local authorities, and separated from each other—because of Will’s ineptness. When a mysterious ambassador offers escape from town, Will is suspicious, but his friends take the offer at face value. However, it isn’t long before they find themselves magically transported to another place and time. We don’t know why or how or even the ambassador’s motives. All we know is that this place is hostile, and crawling with goblins.

Part Elizabethan, part Gothic, and part high fantasy, the blending of genres into a twisted farce has a potentially large audience. Hartley pokes fun at high fantasy tropes and his prose is engaging and clever—which makes up for what the book lacks in plot and flimsy world-building. Will’s narrative is funny without being over-the-top goofy; unfortunately it was sometimes a little distanced and the use of modern colloquialisms threw me off, so I initially had a hard time getting into it.

Will of WILL POWER is self-serving, charming, and loves his creature comforts. Unfortunately, these traits get him into trouble more often than not.

There are six people in the main group, all from the first book. Renthrette and Garnet are brother and sister with a mysterious past who’ve had to live their lives by the sword in order to survive. Orthos and Mithos are both cool guys who are handy to have in a fight, but unfortunately we don’t see them for the majority of the novel. Lishe, the group leader plays a key, but brief role. You’ll have to go back to ACT OF WILL to really get to know those three. And then there’s Will: instigator, troublemaker, whiner…potential savior?

When they arrive in a strange new world, they’re saved from a pack of wolves by Sorrail, the too-good-to-be-true warrior of the ‘Fair Folk’. The Fair Folk are blond, blue-eyed humans who live in the white city, and are trying to protect their people and land from:

Goblins, who are are pretty much anyone not one of the Fair Folk, with a few distinguishing characteristics and abilities. They have wolf and bear mounts. The lands they live in have turned from beautiful forest into dismal swampland. It’s pretty obvious they’re the bad guys… but is it?

Don’t forget the high fantasy trope twisting. That pretty much sets up the plot for you right there. Hartley drags it on and on, although not without charm. Will unravels the inconsistencies of the Fair Folks’ behavior, and it takes too long, but his antics and witty observations are their own amusement. Assuming he won’t completely annoy you as the main character (he seems like the kind of guy you’ll either love or hate).

Is WILL POWER super duper good reading? Well, the prose is fun and the situation is interesting and the genre twisting is entertaining; but the pacing issues, absent main characters from the first book, and lack of explanations almost gave it a mediocre rating. So don’t look at the story too closely. It’s fun and fluffy and good clean fun, but sometimes that’s just what you need.