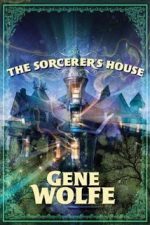 Just saying the name “Gene Wolfe” is enough to evoke contemplations of Hugo Award votes, so we figured we should give his novel from last year, THE SORCERER’S HOUSE (Amazon) a read. It didn’t end up nominated, but we are nevertheless glad we picked this one up. Wolfe has the ability to write the absolute best, or the completely mediocre. Thankfully THE SORCERER’S HOUSE is one of those novels that instantly grabs you, and remains weird and entertaining from start to finish.

Baxter Dunn is a recently released ex-con who was incarcerated for embezzlement. He arrives in a small Midwest town and discovers that and old and mysterious house has been deeded to him by an unknown individual. To go into much more detail would completely ruin the novel for you, but it is safe to comment on how wild, weird and imaginative the novel progresses.

THE SORCERER’S HOUSE is told through a series of letters, most of which are from Bax to his twin brother. However we also get letters to and from a fellow convict of Bax’s acquaintance, a psychic, Bax’s sister in-law, and a few others. We absolutely loved the narration style of the novel with Bax cluing us in on the curiosities of his new life and strange residence. In a way, it reminds us of Christopher Priest’s THE PRESTIGE–perhaps on of our favorite novels EVER. Wolfe’s smooth and elegant prose (where appropriate) lends perfectly to the story Bax is telling through his letters. It adds instant credibility and makes Bax immediately sympathetic.

And that is precisely when Wolfe begins screwing with the reader’s mind.

There comes a point where you begin to wonder just how pure Bax’s motives are, and just how reliable of a narrator he really is. Keep in mind, Bax is a superbly educated man, and he turns out to be quite the clever man. It is these doubts permeating the latter half of the novel that make it SO good.

THE SORCERER'S HOUSE is one of those novels that instantly grabs you, and remains weird and entertaining from start to finish.

Now it isn’t perfect. Indeed the ending of THE SORCERER’S HOUSE is the novel’s biggest flaw and strength. The novel flows along steadily throughout the first 90% of the story only to abruptly end within just a few pages. While the final bit is incredibly thought-provoking, we felt it needed another 50 pages of material to really knock it out of the park. To continue the baseball analogy, right now (due mostly to the sudden ending) THE SORCERER’S HOUSE is like a double off the outfield wall, or even triple into the gap. It’s SO CLOSE to being a home run that it kills us.

This book should be on your list. Read it. Enjoy it. Fans of Wolfe’s previous work will likely love it, as will fans of THE PRESTIGE.