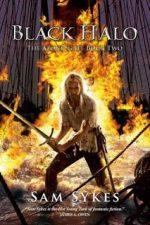 Sophomore novel. You know the term. And if you don’t, then here. Hmm. That didn’t work very well. Did anyone else know there wasn’t a wiki for the term “Sophomore Novel”? Who’d have thought? Now I have the urge to go write one. Perhaps I will. Oh look. There’s a wiki for haiku. How about a haiku on sophomore novels:

Great debut, I say,
but then this lackluster. Why?
It is the way. [[sigh]]

If any of you missed Sam Sykes’s debut, TOME OF THE UNDERGATES (EBR Review), you should really go read it. Loads of fun. I loved it. BLACK HALO (Amazon) is the second novel of the Aeon’s Gate, and after that first one I was seriously interested in seeing what Sam Sykes was going to do next. TOME OF THE UNDERGATES could have been the climax to an entire series and readers probably would have been good with it. Action. Packed. But there was this pretty large issue that the whole thing happened on a boat. Thus, when BLACK HALO didn’t start on a boat, I was ready to go.

Lenk and his five followers, after stealing the illustrious Tome of the Undergates, have crash landed on an island. Well, a massive sea serpent might have had something to do with it. But they’re there. On the island, that is. And apparently it’s deserted. They’re all pretty sick of each other though, and after that last book who can blame them? They weren’t exactly the most happy-go-lucky bunch of folk to begin with. Lenk’s having some problems with these voices in his head. They just won’t shut up. They’ve been bothering him for a while now, telling him to kill everyone or to bail on them because they’re all going to betray him eventually anyway, and they’ve gotten considerably worse since he took a looksie at the pages in the Tome. Kataria is struggling more with the whole lifestyle choice she’s made. She’s supposed to kill all humans, and Lenk is, after all, a human. Soon she starts to hear the voice of another Shict though, and is fighting against all her thoughts and emotions. Gariath has kind of gone off the deep end. Wandering away from everyone else, he starts to talk to another dragonman that apparently died a long time ago, but for some reason is still on this island and has shown up to fill him in on a few choice details about the place.

And honestly, it wasn’t long before I had to ask the question: Does anyone else feel like they’re on the island from Lost? I kind of threw my hands up though when Lenk follows the stream to the cave where bad things happened a long time ago, and then he goes inside it. So much for subtlety in imitation…

Syke’s writing in this book is every bit as good as in the previous one. He has this way of writing that makes it easy to read lots of pages. His characters are, at once, interesting and nuanced and complicated. There were two new point-of-view characters in BLACK HALO that were really quite good. The first is a wizard that’s been charged with tracking down those that use magic “illegally” and without cost, that has difficulty ignoring the abuse of women. This is the character that starts the book off. The one that got me excited about everything because I was going to see more of the world. The second new character is The Mouth, the human through which the sea-goddess Mother Ulbecetonth speaks, that is sent to release The Father from his captivity. Unfortunately for Ulbecetonth, the Mouth’s faith is wavering because of a daughter that he lost to sickness a long time ago. Both of these characters are immediately engaging. This is absolutely one thing that Sykes has brought to the table in both of his offerings to us: great characters.

The detailed, blow-by-blow, thought-by-thought writing of TOME OF THE UNDERGATES worked great for one reason: there was so much action going on that the reader just got swallowed up and dragged along with the current. This made the pacing of the novel fast, furious, and absopositutely more fun than the proverbial barrel of ninja-monkeys. Sykes’s writing here is much the same, but the book lacks all of the action from the first novel. So the pacing is incredibly slow. Painstakingly such. There are a few exciting spots, some fun fight scenes, some tense creature moments, but what’s really missing is a significant amount of progressive action. Most of what is there just feels random or pointless. I did like the climax… well, the end of the book (I don’t know if I’d really call it a climax–there wasn’t a whole lot of actual build-up), as there was a big fight with lots of monsters and magic and dragonman-mayhem. Still, fun as it was, it didn’t feel like it progressed the plot at all. Except to set up the third book. Which it did perfectly. But sill, this is a perfect example of the whole “Middle Book Syndrome” you read about a lot on this blog. If there’s anything that’s obvious by the end of BLACK HALO, it is that the third book of the Aeon’s Gate will be just a chock-full of violence and carnage as TOME OF THE UNDERGATES was, if not massively more so. Which is good, as long as it ends with something other than Lenk getting his hands on the Tome. Again.

Some day I think that Sam Sykes is going to be a really good author. He has “the way” with words. He knows how to write not just characters, but character. And he has a wildly imaginative mind to boot. His books are fun. I admit it, though, I expected a lot out of this one while feeling like I got very little. Too much character, not enough plot. Not enough progressive story. Lots to like, but this one would need so much more, and so much less, to be something really great. Here’s to hoping that the next one is a step up, and that it’s considerably more than just action.

If you’re sold on the idea of this book, consider taking a look at the omnibus that Orbit published after Sykes’s move there: EBR Review. It’s a three-fer.