Review: Down the Road 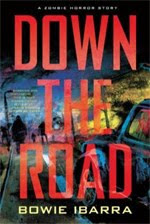 DOWN THE ROAD (Amazon) is one more entry into Zombie-genre novels that we wound up reading, even after we swore off of them. Gallery Books has been good to us, and for the most part we like what they give us, so we couldn’t deny this little guy a read. This is Bowie Ibarra‘s debut (and only, so far) novel.

It’s pretty obvious right from the start that this book isn’t reinventing the wheel, and that Ibarra is an extreme amateur at writing. Transitions are rushed, descriptions (except for the gore…holy crap) were minimal, and character development was only nominal. All of this can be somewhat expected though when you see the page count total at just over 200, and then see that the print is very large. This book took a whole 40 minutes to read. Seriously.

It is our highly-respected, ultimately-important opinion that if you are going to write a “zombie-flick” book in a market this saturated, you have to at least make an effort to do something different. DOWN THE ROAD is exactly what you would expect from a zombie book, with every twist and turn telegraphed pages and pages before it comes. Especially if you have even watched just one movie. To the author’s credit he actually wrote the book some years ago through a publisher that didn’t care to have him revise or edit the book. What this means is that we have an M. Night Shyamalan situation. Little-to-no outside opinion or oversight can be a bad thing. DOWN THE ROAD is basically every zombie movie you have seen, put on paper. It’s like Ibarra didn’t even try to be original, and instead just focused on being as gruesome as possible.

Everything you would expect from a zombie story is here. We have the fascist government trying to contain the outbreak and even the clichéd guy who gets bitten and for some reason doesn’t tell anyone. It was kind of annoying reading a story we have all read or seen about 100 times before. Even in a novel this short we found that our patience wearing extremely thin.

The books succeeds in its aim, but sadly the aim wasn’t very high. If the book were any longer we probably would have gotten bored and put it down. Though to be honest, we kinda wished the book actually was shorter in places. There were a few very explicit sex scenes that really didn’t need to be there. They were strictly shock-value, gratuitous and fantastical. After reading the “Director’s Commentary” at the end of the novel, we have to wonder if–no offense to him–Ibarra wasn’t just putting some of his own fantasies down on paper. It was kind of creepy.

That’s a lot of negative stuff about the book. Why did it warrant Mediocre instead of Hate? Well… we didn’t hate it. Duh! OK for real, there were some things Ibarra did completely right.

While there was tons of zombie-centered gore and action, at its heart DOWN THE ROAD is a decent character study of a man losing his grip on humanity. Ibarra was brilliant in how he focused the narrative on something extremely simple. It is basically the main character’s attempt to get home. He has to traverse a normally very easy, very enjoyable trip “down the road” to his hometown. On the way he encounters all sorts of horror and it certainly takes its toll on him. The rest of the characters don’t have enough to evolve at all, but each reaction to the zompocalypse is unique and gives a feeling of depth to the rest of the cast.

The narrative does have a large hiccup early on in the book. George (Why does every zombie book HAVE to have a character named George!? C’mon people…the homage to Romero is getting old) decides to totally murder two people. This type of degeneracy should have come after some experiences that led him to it. Instead it comes out of nowhere and immediately makes us dislike the main character. Even with this hiccup, something pretty cool happened as we read the book. The more degenerate he became, the more we hated the guy. Then oddly we rooted for him even more and hoped he would succeed and redeem himself.

DOWN THE ROAD is one more entry into zombie genre novels that we wound up reading, even after we swore off of them.

Aside from that early misstep George’s experiences and reactions were interesting enough and pretty well executed… though unoriginal. Another great thing was that Ibarra didn’t feel the need to evolve his zombies, or give them some gimmick/flavor-of-the-month (probably because it was originally written a while ago), in order for them to be interesting. We all love 28 Days Later, but we all kind-of/sort-of wish, inside, that the zombies were a bit more classical. DOWN THE ROAD features the absolutely relentless, shambling, slow-yet-terrifying, zombies that started the genre. The zombie scenes are intense, and not just for the graphically described gore and violence. Ibarra gives these meat-eaters a real sense of malevolence that many Horror books lack from even the most horrific creatures.

We are going to use our cop-out summary for this book, yet again. If you are a Zomb-fan, you’ll probably love it. If you aren’t a Zomb-fan, and looking for something in the Horror genre, it will probably be better to look elsewhere.

Series links:  Down the Road