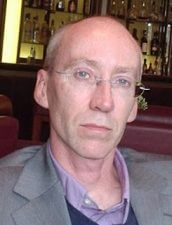 Do you faithful readers want to know the absolute best part of this whole book review blog thing? Author interviews. Just being able to get a few minutes of an author’s time to ask him or her those questions burning in our minds. It’s completely fantastic. What makes it even better is when we get to interview one of our absolute favorite authors, and he is completely open and honest in his answers. Steven Erikson falls in this category for us. The guy completely blew us away with his writing, and then outdid himself with his humble answers to our questions.

Elitist Book Reviews: Steven, thank you so much for chatting with us for a few minutes. We want to start off by giving you a few moments to brag a bit. What do you think makes your series so great?

Steven Erikson: If I was to brag about this series I would have missed the whole point of my own series, which would be a bad thing. For me writing is an exercise in humility. It always astonishes me when I prowl the hate-box (funny how the internet was meant to be a love-box, only to have it increasingly sway in the opposite direction… well, not funny. Disturbing) and read from fans of the genre comments on my coming across as arrogant, either in interviews or in my fiction. For my own sanity I can only assume that by subverting the tropes of the genre in my fantasy fiction, I am somehow perceived as attacking the lovers of the genre, which I am emphatically not doing. I grew up reading and loving the same stuff they’re now reading: but as a writer I wanted to twist it a little, do something different, and avoid the lazy route of reiterating what other writers have already done. This has landed me in the occasional shit-storm, where fans in their tribes feel it necessary to put down other writers in order to build up their favorite writers. Uhm, it’s not a competition, mates, and when I’m being judgmental, it’s self-directed. As writers we each participate to make up the whole genre, and it’s a big, flexible genre. For myself, I do hope that fans of my work read and enjoy as much fantasy fiction as is out there, and to forever remain open to new voices; and, most importantly, to not feel threatened by new takes on the genre. You lose nothing by being open-minded and you lose everything when you shut the door, bolt the lock, and hide from every challenge.

Your question alarms me in that you assume that I feel my series is great. That’s for readers to decide, not me. I did the best I could, with what talents I possess. It’s done, it’s out there. Maybe it’ll swim, maybe it’ll sink.

EBR: THE CRIPPLED GOD is out—and it is fantastic. It’s been a long and epic ride. What kind of emotions are you feeling with the conclusion to this ten-book portion of the story?

Erikson: Exhausted, emptied out, relieved. In The Crippled God I was writing towards scenes I had imagined in my head for nearly a decade. The pressure was immense; in fact, this whole series has been written with that pressure. It was a huge series, written out of heart-break, and for me it was a long, drawn-out search for hope. When it was done, I felt numb. Didn’t write a word for six weeks – my longest drought ever as a professional writer.

When I am asked for advice by beginning writers, I always say ‘finish what you start,’ and it turns out that advice was as applicable to me as to them. I finished what I started and that is a good feeling indeed. In fact, it’s the real reward to all this, because it means that you can walk away, head held high – and I recommend it to everyone, in all endeavors you may undertake.

Erikson: I suppose the most difficult part of writing this series was sticking to my guns, from start to finish. I’ve taken a lot of hits, book after book; and while there has been appreciation from fans it’s often the case that the vitriol cuts through to leave a bitter taste, while the praise washes off. In the end, comments from others, both positive and negative, only reach in so far. The core of desire remains inviolate, but it’s taken a beating at times. The most enjoyable part follows on from this, in that I didn’t waver, or give up, or lose interest, and now that it is done I can look back and, barring a frenzy of book-burning worldwide, the series is out there, done, and will remain for as long as readers enjoy it.

EBR: What is the area of your writing that has improved the most?

Erikson: I don’t know, to be honest. I’m not afraid of complexity, I suppose, though in the beginning I wasn’t about to let my fear stop me, so youthful stubbornness and brazen determination has given way to bemused faith in the process. I guess I learned to trust myself.

That said, writing is not about opinions, not about answers, not about solutions. It’s just a way of searching, and people either come along with you in that search, or they don’t. Used to be I tried to write as inclusively as I could, but really, it never worked for me. I long ago gave up on the notion of universal adoration, and for all my supposed brilliance, I’d still fail Grade Eight math. Now, before that gets quoted out of context (as if I can stop that), no, I don’t suppose I am brilliant. If I have virtues pertaining to all this, they are all double-edged. Patience with stubbornness; ambition with crushing doubt … the usual crap, mostly. In the end, we’re all mirrors to each other. Call me names at your peril.

EBR: Your novels are large. Door-stop sized even. How is it that you have been able to keep such a firm and consistent release schedule in a day where huge delays have seemingly become the norm?

Erikson: As you might glean from my answers to the questions thus far, what kept me going was desperation. I needed to get this damned thing done, if only to discover what the world was like once the series was behind me. There’s a poem in The Crippled God, to open the epilogue, that pretty much sums it up, as it addresses both my core belief and my core uncertainties. It was written in that closing moment of exhaustion, both physical and spiritual, when the only voice left is an honest one.

EBR: Your co-creator, Cam, has improved in his craft dramatically from book to book. What makes him such a good compliment to your own style and your own writing?

Erikson: From the very beginning, in creating this world via roleplaying, it was always an even exchange. I made up characters who interacted with his storylines, and he did the same with his characters acting in my storylines, so everything in the Malazan world has both of us in it. It’s the same when we get together in person: no matter how much time we’ve spent apart, living our own lives, we immediately fall back into that comfort of friendship and shared vision.

It just sort of happened that we ended up meeting on an archaeology dig, spent a few summers working together in the wilds of Northern Ontario (living in the town of Neil Young fame, helpless and hopeless indeed), and became lifelong friends in the years that followed.

You’ve all had this in your lives, I’m sure. The friend who, no matter the distance in miles or years, can just step in time with you the moment you reunite. That said, we’ve been through a lot of stuff together, me and Cam; in many ways, we still write to an audience of one, that one being each other. We’re in conversation, via our novels. It was always a conceit that anybody else would be interested in that conversation. Luckily, a few people were, and are.

EBR: Is there anything you wish you could have done differently since becoming a published author?

Erikson: These kinds of questions are almost impossible to answer. I wish I could have become a full-time writer about ten years before I did: I worked a lot of jobs, some of them soul-destroying; and we spent years being dirt poor (it didn’t help that I grew up poor as well) … but if that had happened, would I be the same writer? Would I have written the same stuff? Who knows. I’m just thankful for what I have.

EBR: The Malazan Book of the Fallen has come to a close, but you have other Malazan tales in the works. What should the masses look forward to in the coming years?

Erikson: I have signed for two more trilogies. The first one (which I’ve already begun) takes us back into the distant past in the Malazan universe. Once that’s done, I will be picking up the tale of Karsa Orlong in the second trilogy. If I can, I will write some other stuff as well, including more novellas and non-Malazan tales.

EBR: Again Steven, we are so thrilled that you were able to chat with us for a bit. Any parting words for our readers, and can we expect to see you at any conventions in the near future?

Erikson: I enjoy conventions and have a few I regularly attend, though I am always open to new ones, depending on my schedule.

Parting words to your readers? Be well, be kind, unwind…