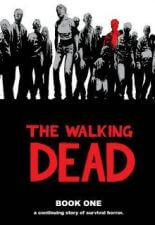 It is natural that various art mediums look to each other for inspiration. The movie industry has been looking to novels for, well, ever. TV looks to movies and novels. Graphic novels, lately, has become to go-to source for new visual material. While watching AMC’s Mad Men and Breaking Bad, new ads began showing for a new show. A show about zombies. The Walking Dead. It looked fantastic.

The first season of the show came and went in a six episode spurt. On the whole it was quite good, though it was lacking fairly heavily in the pacing department. That’s not what this review is going to talk about (though you absolutely should watch the series!). What this TV series did was direct all sorts of attention to the comic series that inspired the TV show. There was a blog post on Jonathan Maberry’s blog back in November talking about zombies. In it, there were several mentions of the Robert Kirkman comic series THE WALKING DEAD. If all those authors in that blog post like it, then it needs to be read.

This series has been going on for a while now, and it is easy to see why. After reading THE WALKING DEAD: BOOK ONE (Amazon) — a hardback collection of the first 12 issues of the series — we were struck by the very human element in it. After all, what are zombies if not a reminder to what we become without our humanity?

The art in the first 6 issues is tremendous. We follow Rick Grimes as he wakes from a coma into a world that has suffered a zombie apocalypse. Just the surface detail there is very 28 Days Later, but it diverges from there quickly. Rick is looking for his family. He is trying to grasp his new reality. He encounters fellow survivors and makes his way through zombie infested Atlanta. The story and art are gripping.

One of the main reasons we don’t read too many comics or graphic novels is due to the poor dialogue. Typically you get panel after panel of people looking shocked and amazed while they repeat over and over, “What?!” It gets old. Or the characters will say and do completely ridiculous things—things that stand out because of the art medium used and because there are so few words. Even the great graphic novels have these issues (WATCHMEN, for example). THE WALKING DEAD isn’t immune to these issues. It has them in abundance. But even with them, the story and the characters help overcome the shortcomings.

A brief comparison to the TV show: the show does a great job of taking the important parts of the comic series and using them effectively. The sections where Rick & Co. cover themselves in zombie guts are terrific. There are dozens of little things that make the comic series great that were used by the TV series (many of which we can’t get detailed about without spoilers). However, as graphic as the TV show can get due to their amazing make-up skills (seriously…they need an award), the comic still manages to be even more shocking. The end of the first 6-issue arc is fantastic and shocking while the TV series covering the same material isn’t quite as good, but shocking in a different way.

With that comparison out of the way, we were left with all new (to us) material to read—namely the second half of BOOK ONE.

THE WALKING DEAD: BOOK ONE is a fantastic read. It clocks in at over 300 pages, and contains a bonus short story as well as a ton of other extras.

The first thing that jumped out was the change in art. Chris Adlard took over for Tony Moore starting at issue #7, and the difference is jarring. Mainly the problems come about with character recognition. Since the entire series in is black-and-white, it is extremely important for characters to look very different—otherwise they start blending together. This is the case frequently in the last 6 issues compiled in this hardback collection. As the pages go by we became more accustomed to the change in style, but we still had problems. These art clarity problems begin a domino effect. It becomes harder to keep track of the large cast (a cast that grows and shrinks dramatically with the casual flip of a page), as well as their races. Dialogue becomes harder to follow. But again, this all becomes manageable as the reader grows used to the new art style.

As for the story itself? It is slow. Much of the danger present in the first six issues of the collection dissipates in the in the last six. This isn’t to say it didn’t hold our attention, but it WAS slow. Really it isn’t until the final events on the farm they encounter, and the last two pages of the collection that things suddenly are thrust back into chaos. Awesomeness indeed.

What struck us was the bleakness of this first volume. Everything is harsh. No character can truly stay happy of free of sorrow for long. Characters die with no regard or how important they were up until their demise.

THE WALKING DEAD: BOOK ONE is a fantastic read. It clocks in at over 300 pages, and contains a bonus short story as well as a ton of other extras. We aren’t gonna lie, it’s pricey. $35 for the hardback. Is it work getting? We think so (as evidenced by the subsequent purchases we made of the following two hardback volumes). Look, we don’t read comics ever. They just don’t interest us. However THE WALKING DEAD has become an exception. The strength of the story has us hooked.

In the coming months we’ll be reading and reviewing each of the hardback collections (currently numbered at six). There may be spoilers from prior issues in our reviews. We want to treat these as almost more of a discussion beginner rather than just a straight review. We encourage you to read along with us. If the hardback is slightly too pricey, you can also pick up trade paperback editions that come in six-issue collections: Volume 1 (Amazon) and Volume 2 (Amazon). Obviously this review covered the first two trade publications. We don’t plan of reviewing graphic novels with any frequency. THE WALKING DEAD is our exception.

*** There are loads of these. Check out the whole series on Amazon