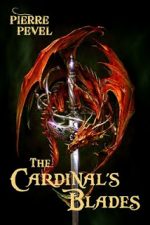 Come on. Historical France. Musketeers. Dragons. Magic. Spies. You can’t tell us you don’t want to read a book with all this awesomeness in it. Fortunately for everyone, all these things are in Pierre Pevel’s novel THE CARDINAL’S BLADES (Amazon), and for the most part this is a great read.

THE CARDINAL’S BLADES takes place during an alternate 17th century Paris. Paris (and therefore all of France) is under threat from Spain’s Black Claw cult. Depending on who you are, one of the main hooks of this novel deals with the various incarnations of dragons. From small pet-like dragonnets, to wyvern mounts, to humanoid-looking dracs…if dragons are your thing, this novel attempts to make them a big deal. Along with the promise of musketeers, adventure and sword-play there is a lot that looks good on paper.

The idea here is Cardinal Richelieu, in an effort to counter the threats to France, recalls the Cardinal’s Blades back into service. Disbanded five years earlier after a failed mission, the Blades are immediately put back into their prior lives of espionage and adventure.

Did you catch all those not-so-subtle references that not everything worked here? Pevel attempts to evoke the feeling of Dumas while simultaneously adding a speculative fiction element. In places it works, but overall that atmosphere is lacking. This could be taken as a good thing depending on your tastes, but we could have used more setting, political and character detail to really highlight the fantastic ideas here. Yes this is the first in a series, so we’ll cut it some slack, but we feel like it was a missed opportunity.

As we alluded to, the dragons are supposed to be everywhere. And yet they never really capture and scene that they are in. Instead of, “Wow, that was an amazing way to incorporate the dragons here!” it was, “Oh. So the only real important dragons we see are like carrier pigeons or look just like humans. Whatever.” In short, the speculative elements of the novel (dragons, magic, etc.) weren’t stressed enough. They were well integrated, but never really felt like a focal-point or an any real relevance.

THE CARDINAL'S BLADES mixes alternate history with speculative elements and fun-filled adventure--and that's what makes it worth picking up.

All that said, the novel is still extremely fun. The translation (from French to English) really kept a foreign feel. The adventure was fantastic, the sword-play fun, and the characters were well rounded. A small nit-pick on character: it would have been nice to have a character list that included their various titles. The number of characters and PoVs is quite large for what is actually a very short novel. There are times when they would all start to mesh together. On the whole, however, they were all pretty great. From their pasts that are alluded to, to the humor they manage to bring to each situation, they are all pretty well done. We aren’t going to get into details on each character (again, there are tons for how small the novel is).

The thing is, THE CARDINAL’S BLADES really shines when it ends. It is the epilogue that really makes you sit a little straighter and pay attention. It essentially promises the reader that the next novel is going to be crazy. Hopefully Pevel makes good on that promise.

If you are looking for a fun-filled adventure novel, THE CARDINAL’S BLADES is worth picking up. The mix of alternate history with speculative elements is a great change of pace from the dense Epic Fantasy novels you are using for door-stops. Give it a try.