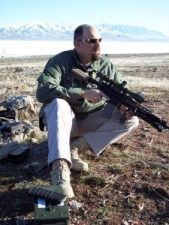 We’ve had the privilege of chatting with Larry Correia a number of times. As an author, he is fantastic. As a person, he is even more awesome… and we promise that Larry doesn’t have any heavy weaponry pointed at us as we type this introduction. So, kick back and enjoy the interview.

Elitist Book Reviews: Larry, welcome to Elitist Book Reviews. Tradition here at EBR states that you have to introduce yourself to the readers by explaining why you and your novels are awesome. And don’t start with that “I’m not the guy to do that,” because we know you.

Larry Correia: Well, I’m a novelist with Baen Books. I’m currently writing the third book in the Monster Hunter series, have a new series called The Grimnoir Chronicles beginning in 2011, and I’m collaborating with John Ringo on a new sci-fi series. Before that I’ve been a military contractor, machinegun dealer, firearms instructor, and an accountant. Which I suppose is a really strange combo.

Why am I awesome? Because EBR said so. And everyone knows that they are never wrong.

EBR: Who do YOU think your novels appeal to (besides Elitists like ourselves with impeccable taste)?

LC: People who like big, explodey, fun without having their intelligence insulted.

My first novel, Monster Hunter International, was specifically written for anyone that had ever watched a horror movie, and found themselves wondering why the protagonist didn’t just get a gun and shoot the monster. It kind of just evolved from there.

You’ll hear a lot of writers give the advice to write what you’d like to read, and I enjoy fast, fun, action-adventure, but not dumb action. Action-filled books can still have great characters. Even though I write fantasy and sci-fi, I try to keep my tactical/technical aspects as accurate as possible. The best kind of compliment I have received is when somebody in Iraq sends me an e-mail saying that if monsters we’re real, that’s exactly how they would take care of business.

EBR: Alright, it seems like everyone always asks what it is like to get that first novel published. That’s neat and all, but what we want to know is what it is like to write that second novel on your contract—for you, MONSTER HUNTER VENDETTA. Was it easier/harder? Were you worried about the expectations riding on the sequel?

LC: Both. It was harder in some ways and easier in others. The easy part was that I’ve gotten better with each book that I’ve written, so I think MHV was a little tighter and smoother that its predecessor. It is really just practice and experience. I’ve got 5 novels done now, and I’ve learned something new from each one.

The hard part was living up to expectations. MHI was a huge hit. Four printings in its first year, bestseller lists, great reviews, etc., so I really wanted MHV to be just as good or better that its predecessor. So far though, so good. The early e-book of MHV released a few months ago, and the reviews have been extremely positive. (plus EBR liked it, so the matter is settled).

Another hard thing about a sequel is that nerve-wracking part where you have to decide how much recap to squeeze in so people who read out of order aren’t completely lost but your existing fans aren’t bored. Nobody wants to read a few pages of “in our last exciting episode—“ so I had the main character give a brief recap of how he ended up where he is while being interrogated in a Mexican prison. I do believe that worked out pretty darn well.

EBR: What’s the hardest thing for you during the whole “writing experience”?

I love to write. I’d do it for fun anyway, (though it is really awesome to get paid for it!) but it takes an effort to stay focused and to put in the consistent hours necessary to produce. Some nights you just want to be lazy and play Call of Duty, but you need to set a schedule and you need to keep writing. Writing is a job. Luckily, I’m a workaholic, which means I feel guilty if I’m not taking on a stupid number of projects, so that helps.

EBR: So far we have two Monster Hunter novels. We know you have a prequel in the works, but where else do you see yourself taking this franchise?

LC: The next book is Monster Hunter Alpha. It is about MHI’s head honcho, Earl Harbinger. Fans love Earl. No spoilers, but Earl is one hardcore dude. MHA isn’t really a prequel, though it does have a lot of background info about Earl and the experiences that made him the man he is. It is the first MH novel written in the 3rd person, and it jumps around to some other characters that will become important in the MH universe.

After that is Monster Hunter Legion. It gets back to the main story-line and PoV character, Owen Pitt. Then is another standalone called Monster Hunter Nemesis, about everyone’s favorite fed, Agent Franks. Officer Friendly, he is not. The fun part of the MH universe is that there is so much story potential. There is a big overall arc involving Owen, but in the meantime I’ve got a bunch of MH stories I want to tell.

EBR: What many of our readers don’t know is that Monster Hunter isn’t your only franchise. Give our readers the HARD MAGIC pitch.

LC: The Grimnoir Chronicles is an alternative-history/epic-fantasy/pulp-noir/adventure. That’s a lot of genres, but TGC turned out great. It takes place in a time-line that diverged from ours when magical abilities began to randomly appear in the 1850s. Nobody knows where this power came from or how it works, but it only seems to bond with a small portion of the population.

HARD MAGIC is the first book set in the TGC universe. It takes place in 1932, during the end of prohibition and the early part of the Great Depression. A secret society of magic users, led by Blackjack Pershing, is trying to keep a Tesla designed super-weapon from falling into the hands of Imperial Japan.

EBR: We’ve read HARD MAGIC. It’s freaking awesome. But if you start doing all sorts of cross-overs between your franchises, we will send all manner of zombies and assassins after you. Please, calm our fears here.

LC: No crossover. There are monsters in TGC, but there are only a couple of variations resulting from certain specific types of magic. I tried to keep a very ‘30s pulp vibe to the creatures and to the technology. I’ll admit, I was a little nervous showing the rough draft of Hard Magic to you guys, because you are tough but fair. I’m really glad you liked it.

Basically, TGC originated because I wanted to write an epic fantasy, but I didn’t want to put it into a normal, been done before, kind of setting. So I made a list of the things that are the usual staples of epic fantasy, complicated world building, lots of characters, big storyline, magic system with rules, etc. So I took this epic fantasy story, and I stuck it into what I thought was one of the most interesting periods in history, i.e. when men wore hats. I’m also a history geek and research nut, so this gave me an excuse to read lots of history books, and then I populated it with all of the retro-cool things I thought would be fun to write about.

Hard Magic is the only book I’m aware of that features a teleporting magic ninja fight on top of a flaming pirate dirigible, played straight, and it works. Being honest, it is the best thing I’ve ever written.

EBR: We totally need John Ringo/Larry Correia collaboration details. This is a pretty big deal, so tell us what you can.

LC: I met John Ringo at LibertyCon. He’s a really great guy, and one of the top writers in science-fiction. We hit it off, and he asked me to collaborate on a new series with him. Of course, I said yes, because this is The John Ringo we’re talking about here. We are still in the early stages, but it is a new setting/idea that John has come up with. It is definitely space-opera. I love space-opera, and this is my first opportunity to write something in that genre.

EBR: What’s it like collaborating on an idea? How do you make the ideas mesh? Also, just cause we are curious, when should we expect you to collaborate with us (surely that is on your checklist of “Goals Towards Global Domination”)?

LC: If I was to collaborate with you guys… Well, I don’t know if the world could withstand something like that. We might have a liability issue from the books spontaneously combusting on bookstore shelves because of the sheer power of awesome.

This will actually be my second collaboration. I’ve written a thriller called Dead Six with another author named Mike Kupari. We just finished that recently and are in the process of selling it now. That collaboration was a little different, since both writers had one first person PoV character, and the story switched back and forth between us, alternating scenes, so there are two totally different voices. It is a kick-butt thriller.

EBR: Let’s say you are at the bookstore, browsing for the latest novel that the awesome reviewers at EBR are raving about (besides your own). Another book browser passes by your hulking mass (most likely wondering—correctly—if you are going to pull a pistol on him), and asks timidly what book you recommend. You can’t recommend your own, because obviously the store has sold through your entire stock. You can only recommend one novel. What is it going to be?

LC: Oooohh… Hard one. I don’t know if I could narrow it down that much. I don’t really have a single favorite book. There’s just too many good ones to choose from. I know which work of fiction I’ve reread more than any other, though, so I’d have to cheat and pick two books (since they really should be read together) and say HYPERION and FALL OF HYPERION by Dan Simmons.

EBR: Usually we ask what we have to do to have cameos in people’s novels. But, well, you already promised us this. Hmm. Uh, what do we have to do to get recurring roles? Yeah, that will do.

LC: I was going to redshirt you guys in MHA, but I’m doing a charity thing for the Misha Hintze kidney transplant fund, where I auctioned off redshirts. We called it: Give the gift of kidneys so Larry Correia can murder you for charity. We actually raised a nice little chunk of money, so now many of my readers can be devoured by werewolves, so it is fun for the whole family. But now all the characters in the book have been named for charity, so I’m going to squeeze you guys into the next one. You’ll have to decide if you want your alter egos to exist in the modern day, in the ‘30s, or in the future.

EBR: Alrighty, Larry. We are thrilled that you took time to answer our completely random and self-serving questions. Anything you want to say to our readers before you shoot them—err, have to go?

LC: I’ve got an absurd number of sample chapters for all my books and other fiction posted for free over on my blog, http://larrycorreia.wordpress.com/ Just click on the Sample Chapters & Short Stories tab.