Progress is good. I always like to see progress when I read a book or follow an author. You get to watch them evolve from their rudiments to greatness not only through their characters and stories, but in their ability to deliver that story to the reader. Unfortunately, not all authors accomplish this. Some just stagnate. Some even regress. A sad but true tale, though completely opposite to the one I’ll paint for you today.

I was unfamiliar with Matthew Sturges prior to being asked to review his OFFICE OF SHADOW (Amazon). To date, he’s more well-known for his co-authored Fables comics (Amazon) than his novels. This is his second novel though, published through Pyr, about a number of characters living in the world of Faerie and their adventures therein. Before diving into this book, I decided to avoid the possible conflict of interest inherent in trying to review a book for which I hadn’t read prior novels in the series. Thus, I picked up MIDWINTER (Amazon) first. Yes, this review is a two-fer. Lucky you! 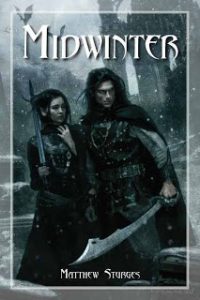 In MIDWINTER, the story started off amazingly well. A disgraced army captain, Mauritane, is released from prison with his pick of any of the other prisoners and given the task of completing a mission for their queen, Titania. No one knows exactly what the mission is, but the other prisoners are raring to go based on the fact that they’ll be pardoned after completing said mission. The only thing that they’re told about it is, “They’ll know it when they see it”. A bit vague, but okay. There are a number of interesting characters presented in this book. Mauritane is just cool, the innocent army captain sent to prison for a crime he didn’t commit, with the ability to speak with Leadership (a magical talent of his). Silverdun, a noble running from his past with a certain magical ability within him as well, though its more of the typical, under-described type. Raive, a fiesty female outsider that is hard and crass, but definitely still has her womanly charm. Brian Satterly, a human that somehow got stuck in Faerie and just wants to get home. There’s also a secondary array of minor characters that are just as interesting as well. Essentially, this story is a romp across the world of Faerie.

It’s very linear in nature, without much character development short of what we get to know during initial introductions. Sturges has a lot of interesting concepts and ideas in the book though. Shifting zones that blur space and time, an established type of human/faerie trade, message sprites with a hilarious penchant for being incredibly annoying, another pack of humans that have gotten caught in Faerie and are trying also to escape, and let’s not forget the flying cities of the rival Queen Mab. In the end though, very little about any of the characters or ideas ever really come together coherently. There was plenty of source material, plenty of goodness, it just all felt so disjointed. Because of this, I ended up fairly dissatisfied when all was said and done. Given this preamble and the fact that OFFICE had more pages and an even smaller type font than MIDWINTER, I wasn’t extremely keen on getting into it. I did though, and I found that I need not have worried so much.

By the time I had finished the first two chapters of OFFICE OF SHADOW, I decided that Matthew Sturges hadn’t written this book. Nope. Just not possible. Try it. You’ll believe me. It was too different, too much better than its predecessor. This one had this scope that just felt BIG. It had history, it had gods, it had complexity… it had world-building! I was completely blown away by the strides it seemed he’d made in character-development, and plot complexity, and in simple integrity to his point-of-view character from the last book. Why do these things matter? Because for me, reading a book is an experience to be savored. These pieces make up the sometimes invisible puzzle of how the book talks to us as readers. Trust me on this one. I’m an expert. Well, I’m an Elitist anyway…the Overlords even gave me a decoder ring.

The main story revolves around three main characters: Silverdun, the noble in exile, hero of the Midwinter final battle, and only character from Midwinter with any significant page-time; Ironfoot, an intellectual scientist (thaumaturge) intent on unraveling the mystery behind a great weapon unleashed at the end of Midwinter; and Sela, essentially the body-prison for a great and powerful creature from beyond anyone’s understanding. These three are approached by a politician of great power and inducted into the Office of Shadow, a secret organization of spies and infiltrators meant to do the unsavory and unofficial work of “keeping the Queen’s peace”. In a way, the book reads like a cold-war spy novel. Queen Mab, with her invading force of flying cities, have constructed a weapon of great power, which will let her forces decimate the armies of Queen Titania. It is the shadow’s job to infiltrate the enemies defenses and sift through gathered intelligence to know how their queen should react. Should they attack? Or should they fortify? How long do they dare wait before making a final choice? The wrong choice could mean death for them all. Then again, the “right one” could as well.

As in MIDWINTER, there’s a lot of stuff in OFFICE to love. In this case, Sturges does a much better job of making you care for and understand his characters. His writing for the most part is very well-done. The pacing does slow at times. There’s a vague sense of Silverdun’s training to be a Shadow, and a mission or two that they’re sent on. Somewhere near the middle of the book, they’re all just going through sheaves and piles of paper and intelligence, ultimately getting bored. (Hint: bored characters = bored readers; avoid) There’s an awful lot of flashback concerning the history of the three main characters. Nearly all of these pages are there to simply fill in what we don’t know instead of leading to any kind of epiphany or realization or twist in the plot though, which is unfortunate. As I mentioned, there is a whole lot to like, but there’s also a lot that just doesn’t come together satisfactorily either.

OFFICE OF SHADOW is fun and interesting and the author has potential, but this offering doesn't come together in a satisfactory way.

There’s still progress to be had for Mr. Sturges, but given the goodness of this book it is progress that I think he can justifiably make. OFFICE was soooooo heads and shoulders better than MIDWINTER that I can easily say I’ll be jumping into his next book when it arrives at the doorstep. Interestingly enough, the way OFFICE was written almost negates the need to read MIDWINTER. In that sense, it seems that the author might have some subconscious opinions of that first book that are akin to mine… Believe me? Ha! Thought you might.

Was this a book fun? For the most part. Did it keep my interest? At times, yes. Potential? Definitely. Thus, Mediocre. Regardless, keep your eye on this guy and hope, along with me, for greater things yet to come.