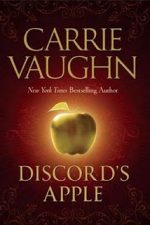 Carrie Vaughn writes books for the female demographic, no doubt about it. Her Kitty Norville series (review of her latest book in that series coming later) has scooped up quite a bit of popularity and recognition, so really it was only a matter of time before she started branching out more and more. DISCORD’S APPLE is her latest effort towards giving her readers something a little different from her normal releases.

Here is where we repeat the disclaimer: Carrie Vaughn writes for the female demographic. She doesn’t write for guys. We are guys. Are you following our logical progression?

This doesn’t mean we didn’t like DISCORD’S APPLE. To be honest, we were surprised how much the ideas grabbed us. DISCORD’S APPLE is set in an alternate present day. The world is on the verge of an all-out Apocalypse, or perhaps even in the middle of one. Wars are all over the place. Nukes are being set off. Rationing is in full-effect. It’s a fairly grim world. We really wish it had been even more detailed, and more described, because we seemingly only get a taste of how bad things are.

In the midst of this Apocalypse, the main character of the novel, Evie Walker, is going though a personal Apocalypse. Her father has cancer. Evie takes a break from her normal job in Los Angeles–she’s a writer for a comic book–to go be with her father. The story has three different time periods. Evie’s, which takes place in the small of Hope’s Fort, Colorado; the end of the Trojan War (and the decades thereafter), following Sinon the Liar, the man who convinced Troy to bring the infamous Horse through the gates; we also get brief glimpses of Evie’s ancestors, and the responsibility they have/were given.

Vaughn's fans will enjoy DISCORD'S APPLE, in a world on the verge of apocalypse, Evie is experiencing her own apocalypse as she learns her birthright.

The characters are all good, if a little too black-and-white for our taste (even the “Liar” character). The good guys are good. The bad guys are bad. The gods are fickle. No real surprises there. Really this novel is all about the the combination of these seemingly unrelated ideas. For the most part, Vaughn does a great job. There are times when the main PoV, Evie, gets a tad too whiny, but it’s pretty easily forgivable due to what she is going through.

Being Urban Fantasy and all, of course there is a mystery, and the question of a passed along birthright. There is a basement room in the Walker home that Evie’s father is the caretaker of. In this room are dozens of mysterious items that random people are showing up to ask for. What are the items? Who are the people? Read the book and find out. We aren’t going to spoil it no matter how many times you ask.

If there is one thing in this book that bothered us, it was Evie’s profession. There are numerous times in the novel where we get Evie writing for her comic. Now we get that she is putting her own fears and frustrations into her comic. It’s a metaphor for her life. We just had a really hard time caring about her profession at all. We would rather have had more focus on the world, or on the things that are actually happening in Evie’s life. What it felt like was Carrie Vaughn projecting herself into her Evie character, who was in turn projecting herself into her comic book character. It was just a bit much, and took away from the actual story that was being told. And really in the end, it didn’t matter much at all, and felt like it was just there to take up space.

DISCORD’S APPLE is a short book. 300 quickly-read pages. The writing is on par with her other series, the characters good but simple, and the story decent. While it felt a little bare-bones, Vaughn’s readers will find quite a bit they can enjoy here. If you are unfamiliar with Vaughn’s work, but don’t really want to jump into a full series at the moment, DISCORD’S APPLE will give you a good glimpse of her style and story-telling technique. Guys: This won’t be your thing. Gals: You’ll probably really dig this.