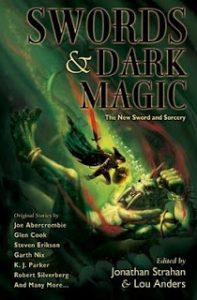 It’s really not an exaggeration when we say SWORDS & DARK MAGIC (Amazon) was easily one of our most anticipated titles of the year. In fact, that doesn’t even say enough. Edited by Jonathan Strahan and Lou Anders, this collection, to us, was like the Holy Grail of short story anthologies. Why? The first three stories in the collection, in the order they appear: Steven Erikson, Glen Cook, Gene Wolf. Yeah. That’s just the first three stories.

First we need to get something out of the way, and yeah it’s a tad petty. The subtitle of the collection is “The New Sword & Sorcery”. Honestly, this isn’t a fair or accurate subtitle. Don’t get us wrong, there are plenty of swords and plenty of sorcery to be found amidst these 500+ pages of awesomeness, but there isn’t anything groundbreaking here. There isn’t anything here that is re-inventing the genre. No, the subtitle should have been something more like “New Tales in Sword & Sorcery”.

Now that that is out of the way, let’s talk about the anthology.

It is fantastic. Are there weak stories here? Yeah. The thing about short fiction anthologies, however, is that you have a collection that appeals to a variety. As we stated earlier, the anthology starts with stories by Steven Erikson, Glen Cook, and Gene Wolfe. Then you have James Enge, C.J. Cherryh, K. J. Parker, Garth Nix and a guy named Michael Moorcock. But see, we aren’t done yet. Then you move on to Tim Lebbon, Robert Silverberg (maybe you’ve heard of him?), Greg Keyes, Michael Shea, Scott Lynch, Tanith Lee, Caitlin R Kiernan, Bill Willingham, and ending the collection with Joe Abercrombie. If you can’t find something to LOVE here, you have issues. You see, for every story we felt weak and mediocre, there was another story (or two) that were just unbelievable. The good stories were SO GOOD, that any runts in the litter could be easily forgiven.

So, which stories did we like the best? The stories we mention below won’t surprise you; you DO know our tastes quite well after all.

“The Deification of Dal Bamore” — Tim Lebbon
A grim tale of sorcery and revolution. Lebbon’s descriptions are so clear. All the is happening here a criminal–a possible martyr to a cause–is being escorted to receive a token trial followed by execution. Things go deliciously out of control, of course. Makes us want to brush up on our Tim Lebbon. Such good stuff here.

“Dark Times at the Midnight Market” — Robert Silverberg
Really all we should have to say is, “It’s a Silverberg story. Of course it is awesome.” Even then, it was surprising how much we enjoyed this story. “The Midnight Market” is a Majipoor tale. To some, that will be enough to know whether you will like it or not. To the rest, the Midnight Market is a place where essentially anything can be acquired… though right now it is going through a bit of a recession. This story is all about the comedy. It is timed and executed with perfection.

“The Singing Spear” — James Enge
One of the best stories in the collection. Enge is so absurdly underrated. His character Morlock Ambrosius is a man of legend. A sorcerer of unparalleled power. And, uh, a complete drunk. “The Singing Spear” is a tale about what Morlock does when his bartender is killed. Enge is freaking terrific. This story will make you want to read more of his stuff. We suggest starting with BLOOD OF AMBROSE.

“Tides Elba: A Tale of the Black Company” — Glen Cook
An all new Black Company story? Featuring Croaker? This story begins with our beloved cast of characters realizing things have been far too good lately. In their experience, that is never a good thing. Balance and all that. Everything you like about Cook is in this story. He is one of our favorite writers. Ever.

“Goats of Glory” — Steven Erikson
You knew it was gonna be on here. It starts a tad slow, but when it gets going, it gets GOING. Five soldiers wander into the town Glory. The gravedigger sees them coming and begins digging five graves. In true Erikson fashion, we get great humor mixed with amazingly described action. We loved this story. The ending was absolutely PERFECT. Was this the best story in the collection? Almost. It pains Steve to admit it, but there was one story that topped even this treasure.

“The Fool Jobs” — Joe Abercrombie
If this is what we get to see in Joe’s upcoming THE HEROES, we are going to be in heaven. The main character? Craw. You may or may not remember him from the First Law Trilogy. Craw, along with a… colorful… cast of characters are sent into a small town to get something. They don’t know what though. They’ll know it when they see it. Seriously. Humor and action. A seriously incredible story. Was this the best story in the collection? Almost. You know how much Nick loves Abercrombie. But even he had one story above it.

(Fanning yourselves in anticipation yet?)

SWORDS & DARK MAGIC should be on every bookshelf.

“In the Stacks” — Scott Lynch
The. Best. Story. There was no debate. No arguing. Lynch’s “In the Stacks” is just a freaking masterpiece. Not nearly as irreverent as his other works, yet just as imaginative. It takes place in a wizard’s school. The students, as a final exam in their current year of schooling, must return a library book. Really. The library, of course, is violent and sentient. We feel that people forget just how good an author Lynch is. This story will remind you. And make you want to re-read LOCKE LAMORA and RED SEAS. And make you salivate in anticipation for his next book. Unreal.

So there you have it. Just because we didn’t mention the story you were eying doesn’t mean it wasn’t good. Moorcock’s was great. Parker’s was actually good as well. As was Wolfe’s. We just don’t have time to talk about all of them.

This is a collection that should be on every shelf. The main problem with it? It makes us want the next novel by these authors now… no, make that YESTERDAY.

As a final note, we want to mention the introduction to the collection, “Check Your Dark Lord at the Door” by Lou Anders and Jonathan Strahan. This is the history of Sword & Sorcery that everyone should know. Serious kudos to these guys for taking the time to show where the genre came from, and then for giving us this terrific collection.

If you are like us, you will appreciate the value of a Limited Edition of this book that is numbered, and signed by EVERY AUTHOR IN THE COLLECTION. Check it out at Subterranean Press.