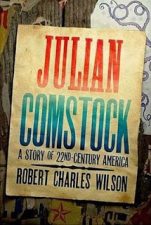 Wilson’s latest novel is a a tale set in 22nd Century America, in and around 2172. That makes it SF right? This novel is written by Wilson, so is HAS to be SF. Right? Well… kinda… but not really. Get all your preconceived notions out of the way. COMSTOCK is not really SF, and perhaps this is why some people have been put off by it. This is not like Wilson’s prior novels. Rather, COMSTOCK reads like a Civil War novel while simultaneously being a biopic of a famous “historical” figure: Julian Comstock.

We know, it is all a bit confusing at first. You see, in COMSTOCK the America that we know today had changed radically. The world has gone through an Apocalypse of sorts–the End of Oil–due to wars and oil consumption. Huge masses of the population of America (and the world) have perished–the Crisis of Infertility follows–and we essentially have hit the reset button. The “Secular Ancients” (us) were all heathens (like Nick) and such advances like Space Travel are now considered myth. The Presidency of the country (sixty states in this version of the future) works closely with the Dominion to create a Theocracy that governs everything. Our First Person PoV is Adam Hazzard (a would-be author who is almost as awesome as we are), and JULIAN COMSTOCK is told as if it were Adam’s biographical work on Julian Comstock, the nephew of the current President of the US.

COMSTOCK is a Futuristic, Alternate Historical, Biographical, War, SF novel. Yeah. The events of the novel follow Adam and Julian as they are drafted into America’s war with the Dutch. Some people will just not like this novel. After all, when you hear the name Robert Charles Wilson, you automatically think SF. This isn’t SF. And yet there is something about COMSTOCK that will entertain nearly anyone. The prose used in the novel made us really feel like we were reading Historical Fiction. GOOD Historical Fiction. It lends charm to every sentence, and helps the readers “buy-in” to the dilemmas the characters face. Each character is well-realized and entertaining. If you speak a little French, you will get even more enjoyment, and even some great humor out of it.

The setting was absolutely fantastic. The idea of America falling to an oil-shortage-induced Apocalypse isn’t a new idea, but Wilson’s execution of the theme is so incredibly believable. Wilson does an amazing job of blending the familiar with the fantastic. The pacing of the novel was, in our opinions, perfect and the length of the novel seemed neither too short, nor too long. Really, we had no idea where the novel was going. It was as if we were along for the ride, and we enjoyed every minute of it.

Now, this isn’t to say everything was jellybeans and gumdrops. There were a few instances where the way characters behaved forced us to suspend our disbelief a bit more than average (the section where Adam saves one of main female characters, Calyxa, is the main point of complaint here). In addition, it would have been nice to have a map of the altered layout of the US. Being that this novel was set up like Historical Fiction, a map would have been fitting. The ending also fell just a tad flat (a very small tad at that). There was a moment where we thought the future was going to follow Abraham Lincoln’s life as the President, but instead the book ending more calmly than we imagined it would.

None of these items are deal-breakers. They are more than made-up for by Wilson’s prose, setting, characters, and his depictions of war (which are truly fantastic). Of all the Hugo nominated novels we have read so far, is is a toss-up between Wilson’s JULIAN COMSTOCK and Miéville’s CITY & THE CITY (EBR Review) for best novel.

Once you understand this isn’t really SF (though we are labeling it as such for technicalities sake), you won’t be disappointed. JULIAN COMSTOCK is a must-read novel.