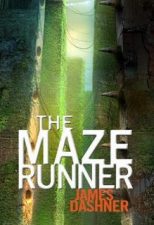 James Dashner‘s THE MAZE RUNNER (Amazon) has garnered a lot of attention since its release. It is a novel filled with really cool and unique ideas, so on that end, its attention is completely understandable.

The plot centers around a group of amnesiac teenagers, stuck together in a foreign, hostile, and deadly maze, where bizarre creatures roam. These creatures are called Grievers, and they hunt the Gladers–as the kids call themselves–while the walls of the Maze are constantly changing. They are in marginal contact with their “captors” who send them supplies and new kids. However, the schedule of “one new kid a month” is broken the day after the main character Thomas arrives, when Teresa, the first girl Glader ever arrives with a message that “Everything is going to change.” We should mention hate this over-used phrase.

We both froth at the mouth for a good dystopian story, go into convulsions for a post-apocalyptic story, and one of Nick’s favorite topics is social experimentation. With all of that going for it, you would think this good would be a shoo-in for a recommendation for us, right?

Uh… hesitantly so. Kinda. The first conclusion that we both came to after reading the book, was that it was a fantastic book, completely entertaining, and ridiculously annoying. It’s probably the most irritating good book we have read.

The first thing to mention about our irritation is that it has all the bad parts of the TV show Lost, and the irritation of WoT. None of the characters will communicate! We think it is cheating to fake adversity because the characters act like idiots, when it behooves them not to. Maybe we give too much credit to humanity, but when there is a problem to be solved, usually people will, at least eventually, come together to solve it. While the Gladers do cooperate to create a kind of Lord of the Flies hierarchy and governance so that they can survive, they don’t cooperate when it matters most.

It seems like Dashner just included zero communication simply for the sake of adding conflict. So many times it made sense for the characters to talk to each other, but instead nearly all of the dialog devolves into “You’re so dumb for asking that question. We aren’t going to explain anything to you because you’re a newbie. We get really upset and irritated when you ask questions, but we sure aren’t going to answer them so you will stop asking. We’d prefer that you just keep asking us questions so we can call you names and stay in this awesome Maze forever. Let’s go eat, so you can ask me more questions that we won’t answer so we can call you more names, that you don’t understand, because we won’t answer your questions.”

OK… we exaggerate… barely. Some quotes from the book:

“Why do you come in here asking stupid questions? It’s really annoying.” No, Dashner, what is annoying is your way of avoiding having to answer questions.

Another thing that bugged us, more than just a little bit, were the logical inconsistencies in the book. Yeah, we know it is a YA book, and perhaps our expectations were a bit too high. Admittedly, when we read a book like this we want our minds blown, not mildly stirred.

Example? For over TWO YEARS the Gladers were mucking about in the Maze, and they couldn’t figure it out until Thomas and Teresa came to the Glade. The solution was obvious from close to the beginning, and we both were hoping it would be something a bit more inventive. It wasn’t, which made us mad because we couldn’t believe it never occurred to the characters to try it.

Then there is the fact that if the characters get stung by a Griever, if they get back to the Glade in time, they are given Grief Serum which briefly, and violently restores some of their memories. But if they talk about them, something happens they wind up doing crazy stuff like trying to kill themselves. Well a certain character (we don’t want to spoil it) gets stung, gets the Serum, and then proceeds to disobey all the rules Dashner has set on how characters react to this… with no repercussions.

So yeah. Logic holes. They bother us.

Also… the book hamstrings itself. The aforementioned problems keep the throttle in idle instead of letting it roar, and the ending happens a few chapters too early, making the climax actually pretty boring.

If you like YA and can forgive the lack of communication in the novel, give THE MAZE RUNNER a try.

We guess we should throw in a mention of what we actually thought of the characters themselves. Honestly, it was somewhat hard for us to care about them. Dashner’s focus on denying information to both the characters and the reader was 100% successful, but had the side effect of denying us a connection to them. When any of them died, it was with no drama, for us, whatsoever. We didn’t care at all what happened to any of them. Even when a certain character dies that was supposed to be a big deal… well, it just wasn’t.

OK, that’s a lot of negative… and normally would be enough for us to put the book down. However, it was a short read. Just a couple hours, which helped it out immensely. We both, despite the irritation, liked the book. When we talked about it, it was much harder to define why we liked it than why we didn’t but we kept coming back to the conclusion that we did enjoy it. How’s that for vague?

Perhaps it was the fact that it truly was an attempt at something very unique. Yes it took things that have been done, but blended them into this cross-genre tale. If you took ENDER’S GAME and LORD OF THE FLIES, and smashed them together, you would get something a lot like this. Which, is more than just one point in the win column.

We suppose our final conclusion is that if you like to read YA a lot, and you can forgive the lack of communication in the novel, you should give this book a try. If you like dystopian stories, then you will find something to enjoy here.