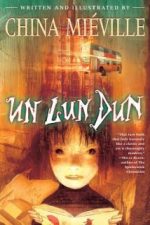 First, we want to thank Kaylynn ZoBell for letting us borrow her copy of this novel. She is full of awesome, and hopefully, will be published soon so we can do advance reviews of her work (no pressure there, Kaylynn).

Secondly, it’s been a long time since we have been this conflicted over a novel.

UN LUN DUN by the excellent China Miéville (Amazon) is a Alice in Wonderland-style tale about two girls living in London who are mysteriously transported to Un Lun Dun (UnLondon… get it?). One of the girls, Zanna, is the Prophesied One who is supposed to save Un Lun Dun from a disaster. The other girl, Deeba, is the Prophesied Sidekick (seriously, it’s mentioned in the glossary of a talking book they encounter).

UN LUN DUN is a YA novel that feels…UnYA (our cleverness with words is only exceeded by our eliteness). The two girls feel like they belong in a Middle-Grade book, the story feels YA, yet the writing has a tendency to flirt with the normal adult-level fiction. This is China Miéville, and normally this means we get the truly dark and bizarre. With UN LUN DUN, it felt like Miéville was really trying to not be so dark and twisted, but perhaps he tried too hard. The reason Miéville is so awesome is specifically for his imaginative ability to create the disturbing. There really is none of that here, and we were a bit put off. However, UN LUN DUN does have its moments. Most of the imaginative aspects are built around word-play, and they all work surprisingly well. Unbrellas (yes, that is an “n” not an “m,” and they are alive), Black Windows (window frames with spider legs), Parakeets (they have a feather shaped like a key), ninja trash bins (complete with lids and nunchucks), and a dozen uses of the word “smog.” Those are just an incredible small sampling of the crazy inhabitants of Un Lun Dun. To help out your imagination, the book it littered with interior illustrations. They are awesome, and we wish more novels had them (not to mention Miéville did them himself).

UN LUN DUN breaks all the rules; the best part is when you finally realize who the real hero is as well as how the heros go about their heroic quest.

The best part about UN LUN DUN is when you realize who the real hero is (and how fitting it is), and how the main characters go about their heroic quest. Miéville does a fantastic job in breaking the rules here (We know, vague. No spoilers, remember?).

Are you confused as to whether we liked or disliked the novel? For a while we were too. However, the more we thought on it–like most of Miéville’s novels–the more we found ourselves charmed by it. It was so bizarre, and so different, that we can’t help but appreciate it. Miéville mentions that he got a lot of advice from Neil Gaiman. We can tell, and while UN LUN DUN isn’t as strong and Gaiman’s work — this novel will most ofter be compared to his novel, NEVERWHERE (Amazon) — it is still worth borrowing or the price of a cheap paperback (what we mean is, don’t pay more than $10 for it). Though, we’ve got to say, the hardback is stunning in appearance. One of the most beautiful, unique covers we’ve seen in a while.