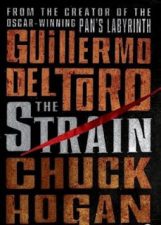 How about a requested review from one of our readers?

Have you ever watched the movie 28 DAYS LATER? (Amazon) The basic plot is that a virus gets loose among the population of England. This virus turns people into rage-crazed zombies, whose blood, when given to a non-exposed person, turns them into a zombie within 30 seconds. Essentially, in the movie, we see the initial release of the virus, and then we cut to 28 days later (get it?) and the aftermath of the spread of the virus.

THE STRAIN by Guillermo Del Toro and Chuck Hogan (Amazon) follows this basic premise, only instead of zombies we get vampires. It’s difficult to say if we liked this book or not. It has promise, and it has the monster version of vampires, so that’s good right? Well yeah, kinda. THE STRAIN begins with a plane touching down and then going completely dark. One second the pilots are chatting with Air Traffic Control, and the next nobody can raise them on any channel. They call the CDC in to check out the situation. When they board the plane, everyone is dead (see where this is going?). The first gap in logic is here. All the main characters–the main one, Eph, is from the CDC–comment that all the people on the plane seem to have just taken death peacefully. Considering the fight people put up later in the novel when being attacked by vampires, it is never explained why these 200+ passengers just said, “Sweet, take my blood!”

The marketing on the book states that Del Toro and Hogan have reinvented the vampire. This is simply not true. A virus/parasite that creates vampires has been done — see I AM LEGEND (Amazon) and NECROSCOPE (Amazon). Really, there is nothing new here, other than a thin attempt to link a biological agent to most of the general mythology of vampirism. There is no effort taken in this novel to explain why a silver-backed mirror can show the true nature of the vampire. There is no effort made to explain how this biological agent relates to the fact that vampires can’t cross running water (much less a freaking ocean). The ending itself (which deals with a major vampire myth) is where the huge problem, and an intentional logic gap occurs–though I can’t tell you it what it is without ruining the ending. Also, the logic the characters follow that goes from “this is a virus” to “let’s behead everything!” happens in the span of a paragraph. One of our main characters is an old man with a heart condition, who had all of the bones in his hands crushed (and NEVER ATTENDED TO), yet he can easily grip the handle of a sword, and DECAPITATE vampires with one swing… like cutting through butter. Yeah. Like we said: thin. And really, these are just a few examples.

We wanted to like this novel, but it just wouldn't let us. THE STRAIN is a fun novel that ends with nothing resolved.

Now, it can be easy for many readers to ignore these things, and if you can, the story progression can be a fun, popcorn-novel ride. And to be fair, THE STRAIN is book 1 in a trilogy. For all we know, every single plot hole and logic flaw will be answered in later novels. But they should have been addressed in THIS novel. The writing isn’t bad, and the action can be GREAT. In fact, there are some moments where we could absolutely visualize the scenes, and it creeped us out. But therein lies the crux of the situation: a lot of this novel feels like Del Toro work-shopping a screen-play to his potential viewers. This would normally be fine, as Del Toro is awesome, but this is a book, and it needs to have the feel of a book, not a screen-play. We wanted to like this novel SOOOOOOOO bad, but it just wouldn’t let us.

Look, if you can turn your brain off, THE STRAIN is a fun novel that ends with nothing resolved. We would recommend that you wait till you can get it for a cheap as possible, or until future volumes come out. However, if you think too hard here (or, really, at all), you will punch holes through the plot and characters like they are tissue paper. The decision is yours, and we won’t judge you either way (maybe). All this said, we are relieved that the vampires are monsters. This is a step back in the right direction.