Review: The Blade Itself 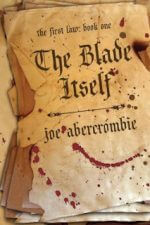 Welcome to another completely superior review by us guys here at Elitist Book Reviews. The chosen book this time around is THE BLADE ITSELF by Joe Abercrombie (Amazon).

THE BLADE ITSELF is a refreshing first novel in what we would call a dark fantasy trilogy. Abercrombie gives us a cast of characters that that have even more attitude than we do–no easy feat. Included in this cast we have a crippled torturer as a main character. Tell us, how often do we get to see a torturer as a main PoV in epic fantasy now days?

What you need to know about this book is that it is full of brutal straight-forward action. Not that there is anything wrong with highly stylized action, in other books, but it gets over-used. Abercrombie manages to lend some realism to the battles that make them refreshing (yes, that word again–deal with it), and completely enjoyable. If you are a fan of the likes of Martin, Erikson, or Lynch, THE BLADE ITSELF and its sequels, BEFORE THEY ARE HANGED (Amazon) and LAST ARGUMENT OF KINGS (Amazon), should already be on your growing bookshelves.

THE BLADE ITSELF is a refreshing first novel with a cast of characters that that have even more attitude than we do.

Action-packed, dark, gritty, and not without an infusion of wit. This is THE BLADE ITSELF. In our opinion (which may as well be a fact as far as you are concerned), you should getting up from your comfy desk chair at this moment to rush to your local bookstore to buy this book. While you are there, pick up the follow-ups. Do it, do it. Or, go grab it online.

Now, since this book is incredible, we feel it is important for you to go support its author, Joe Abercrombie. Go to his website, and give him a big high-five for writing great fantasy novels.

Also, some special effort went into bringing these novels to the USA from the UK (where they were originally published). Go thank the very professional, skilled, and over-all nice guy, Lou Anders over ay Pyr books.