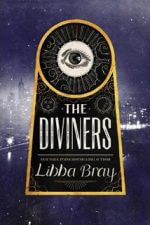 It’s too soon to be declaring any book as the best of the year in any category. But! It can be said that THE DIVINERS by Libba Bray (Amazon) is pos-i-tutely one of the most enjoyable and promising of 2012. This is an urban fantasy, historical fiction, mystery epic that accessible to young adults while still managing to be entertaining to an older audience. Finding the rare gem like this is the very reason I read.

Evie O’Neill has been shipped off to live with her uncle in New York City. The exile is intended to be a punishment but Evie sees only opportunity in the bright lights of the Big Apple. The city is full of potential and Evie’s uncle is only concerned with managing the The Museum of American Folklore, Superstition, and the Occult – jokingly referred to as “The Museum of Creepy Crawlies.” Life is good until the police seek Uncle Will’s assistance with solving a series of occult-based murders. Evie has a very unique and unnatural gift that may enable her to help catch the crazed killer…if the killer doesn’t catch her first.
Read the rest of this review »

Before the Devil Breaks You