Posted: July 4, 2016 by Vanessa in Books We Like Meta: Rajan Khanna, Urban Fantasy 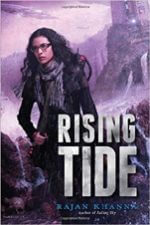 Ben Gold is in serious trouble. After the events in FALLING SKY, he now finds himself imprisoned on a ship captained by a man named Malik who would like to see Ben dead. Fortunately, Ben has the brilliant Miranda, who negotiates for Ben’s life by offering her medical skills in a post-apocalyptic world where such a resource is in short supply. The question is: standoffs don’t last forever, so how will they escape?

Ben has spent his life as a scavenger in a world where only the clever and strong survive, which means Ben has talents of his own. So he negotiates for his life in exchange for scrounging up ship parts Malik needs to keep his boat afloat. But Malik has Miranda, which doesn’t give Ben much leverage.
Read the rest of this review »