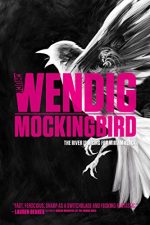 I’ve been waffling for a long time over whether to read these books or not. I don’t know why. You see, there’s this moment when you’re reading a review–even when it’s a review from the very site that you write for–that you just know you’re going to read the book. That happened to me when our illustrious reviewer, Nickolas, reviewed BLACKBIRDS by Chuck Wendig (EBR Review). Because, you see, I go in pretty hard for a good character. Especially a good tortured character, and once you’ve read Nick’s review and the actual book, you can almost see the torture spread across that skein of words. They rend you and twist you, and after you leave those pages behind, they haunt you with the understanding that not only is Ms. Miriam Black a real person under all of that grime and grit, but she also might as well be you, or me, or anyone else for all the good it does her. Because Miriam’s life is like none you’ve ever seen, and anyone, given her life, might have understandably made the same choices as she.

MOCKINGBIRD (Amazon) is the second in the Miriam Black series, and yeah I know it’s been out for a while now. I plan on running through them all though, because these are seriously great stories. Prior to reading this series, I was only familiar with the author’s name through seeing them on several Star Wars novels, none of which I’d ever read. After I get through this series though, I’m going to have to put him on my list of authors to watch out for. There was just so much goodness in the way this guy writes to let any of his stuff slip past my awareness.

MOCKINGBIRD picks up about a year after the events of BLACKBIRDS. Miriam and Louis are living together on Long Beach Island. He, continuing to drive truck, and she, trying to keep her life together and her psychic ability in check. Let’s just say that he’s doing a better job of it than she is. Miriam was never meant to sell clothing, pack groceries, or sling hash. One thing, and one thing alone, has dominated her life since she ran away from home as a teenager: her ability to touch someone’s skin and see exactly when and how they’re going to die. She’s taken to wearing gloves these days, to avoid falling back into the pit of depression and despair that the visions bring. But the manager at the local grocery store where she works has finally gone far enough and Miriam snaps. So she decides she doesn’t care anymore. She has to know how this freak is going to die.

But Miriam just never expected that the lady would be dead within the next five minutes.

Just as with BLACKBIRDS, Miriam Black is very much the center of this novel. Its twists and turns hinge on her choices… coerced or otherwise. It is the development of her character that dictates how she handles the visions, as she and Louis decide that maybe hiding behind a pair of gloves and a “regular” job isn’t the way to go anymore. We get more of that character this time around. More of Miriam’s backstory, and even some more of Louis’s. Another peek or two into the pain that has come before this whole mess. And lots of intimate looks at the pain and mess that is still in store for them.

Not for the faint of heart, but packed with horrific goodness, MOCKINGBIRD is more Miriam Black as she's inexorably led toward a dark, impenetrable river.

It felt like Wendig pulled out all the stops on his comparative language here. There’s so much of it, and it’s so good. When the villain of the story finally makes his debut, the tone of everything just gets hammered with creepiness and the whoa-factor cranks way up. You looking for a great piece of the horrific? Look no further, people. In these pages are the means to twist your mind, and turn your stomach, and crush your soul. And despite how heavy it occasionally got, I never once wanted to put the thing down.

Without revealing any spoilers (well, any MORE spoilers, I guess. I did kind of already tell you that Louis survived the first book… for the most part), readers of the previous novel should remember the killer twist that came at the end of BLACKBIRDS. The source of that twist comes to bear very quickly in this book and plays a pretty major, if indirect, role throughout the story. Was uber excited to see that. The even cooler part of the whole thing, is that even after this second book, I still have no idea what to think about what the consequences of the twist were. Can’t wait to see where else this all heads in the next book.

Not for the faint of heart, but jam packed with horror-bound goodness, MOCKINGBIRD continues the story of Miriam Black as she finds herself slowly pulled down into currents of a river, that is not only dark and impenetrable, but also on the rise. If you dug the first, you’ll absolutely dig the second.